Crane perched on a tortoise or turtle, clutching a serpent 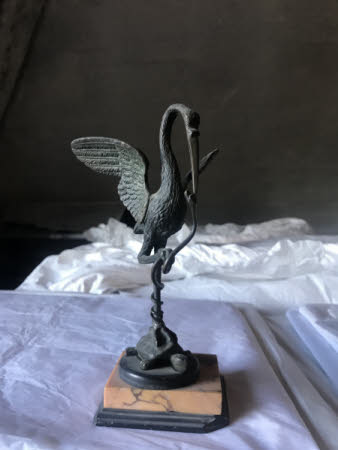 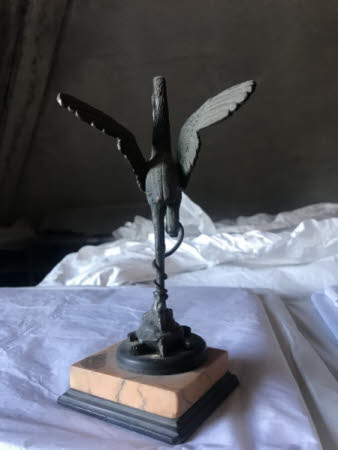 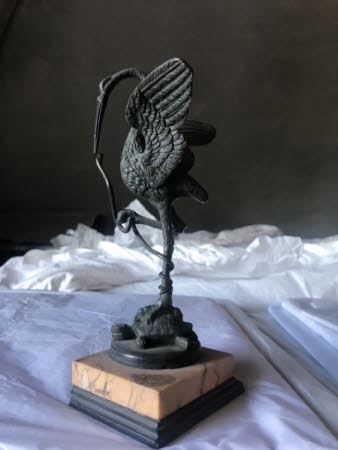 Bronze on bronze and marble

Bronze on bronze and marble base, crane perched on a tortoise or turtle clutching a serpent, Chinese or Japanese style, 19th century. A crane perches on one leg atop a tortoise, the other leg, raised, clutches a serpent to eat. The crane's wings are raised, as if about to take flight.

The crane and tortoise/turtle are auspicious animals in Chinese, Japanese and South-East Asian culture. The crane traditionally represents the heavens and longevity, while the tortoise/turtle is one of the four celestial animals in Chinese mythology, and a sign of earth and longevity. Together the animals represent long life, the harmony of heaven and earth, and, in folklore, friendship and cooperation. According to an old Chinese tale, a drought once prevented the crane from landing on earth to rest until the turtle emerged from the water to offer its shell as a landing place. Years later, when a drought dried up the turtle’s lake, the crane flew the turtle to a distant lake that has escaped the drought so it in turn could rest. This decorative object is in the Chinese or Japanese style, produced in the 19th century for the European market. Alice Rylance-Watson October 2018