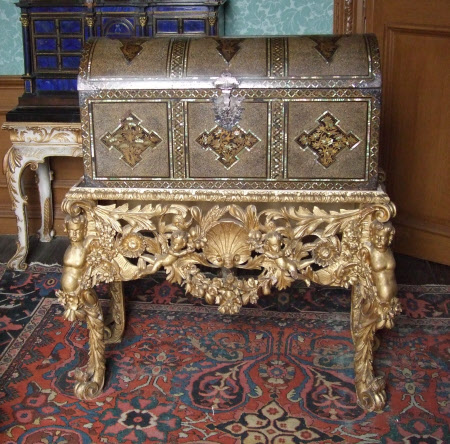 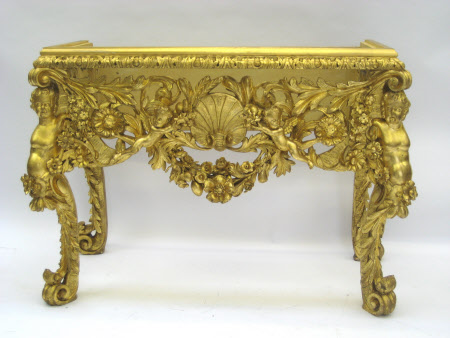 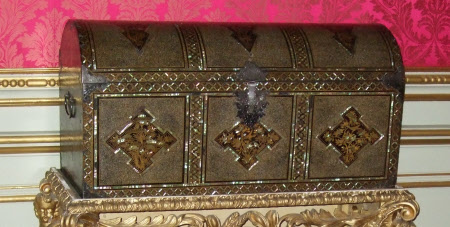 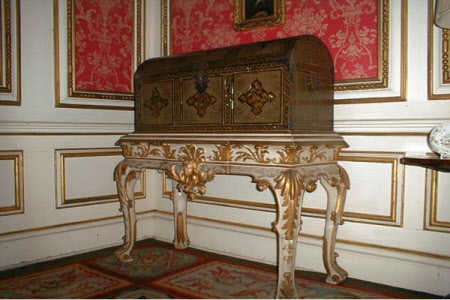 A lacquer, shagreen and mother of pearl inlaid coffer or chest, Japanese Export, circa 1630. On an associated English giltwood stand, circa 1710. The coffer with domed lid and sides decorated with shaped lozenges of flowering branches including an owl within geometric mother-of-pearl inlaid borders on a ray skin ground, mounted with engraved silver lockplate, angles and handles. The interior of the coffer is decorated with trailing floral designs and birds. The giltwood stand with deep carved frieze pierced and carved with putti, flower heads and acanthus, on scrolled legs carved with putti and foliage.

This coffer is an example of Japanese lacquer made for export to Europe, differing in decorative style and form from those made for the domestic market. It was not until after the Portuguese reached Japan in 1543 that organised trade of lacquerware with Europe began. Japanese craftsmen evolved a style of decoration they considered appropriate for Western tastes. This type of export laccquerwork was in a hybrid style that combined western forms with decoration derived from both foreign and Japanese traditions. The majority of these pieces were cabinets and domed coffers. This example is in the Transitional style, between 'Nanban' and the 'Pictorial' style of export lacquer decoration and lasted until c.1630. Nanban lacquerwork is characterised by gold maki-e ('sprinkled picture') lacquer on a black ground, inlaid with a profusion of pieces of mother-of-pearl shell, either crudely or precisely cut to shape. This was usually in the form of geometric designs or trees, plants and flowers, with occasional birds, animals and, more rarely, human figures. The Pictorial style began in the 1630's and overlapped with the Transitional Period continuing throughout the second half of the 17th century and into the 18th century. (James Weedon November 2018)

Sold Sotheby's 'Belton House' sale 30 April - 2nd May 1984 Lot 108. Sold with a different gilt and painted stand, now reunited with the Lapis lazuli cabinet (NT435082) at Belton. The current giltwood stand is associated and may possibly be the stand made or adapted for the Lapis cabinet when it first arrived in London circa 1710-15. Purchased with a grant from the National Heritage Memorial Fund (NHMF) from Edward John Peregrine Cust, 7th Baron Brownlow (b.1936) in 1984.