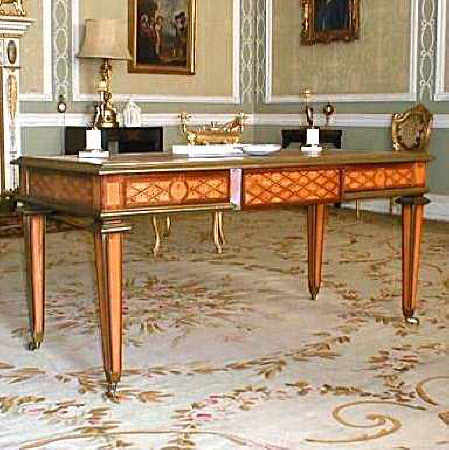 A rosewood, bois satiné, holly and parquetry inlaid brass mounted bureau plat or writing table, after a design by Jean-Henri Riesener (Paris,1734-1806) French, circa 1860. Of Louis XVI design, the rectangular top inset with a leather panel and with brass moulded borders, the frieze with three drawers. Mounted on square tapering legs with fluted corners and brass moulded capitals. The top and frieze inlaid with dot and trellis design parquetry.

The dotted trellis work on the top surface and the frieze became very popular in France in the 1780's and was often used by Riesener. The taste for 18th century design was reproduced during the second half of the 19th century in France and many earlier models were copied in varying forms and qualities. see: Christopher Payne '19th Century European Furniture' ACC 1989 for detailed discussion and analysis. James Weedon (September 2018)