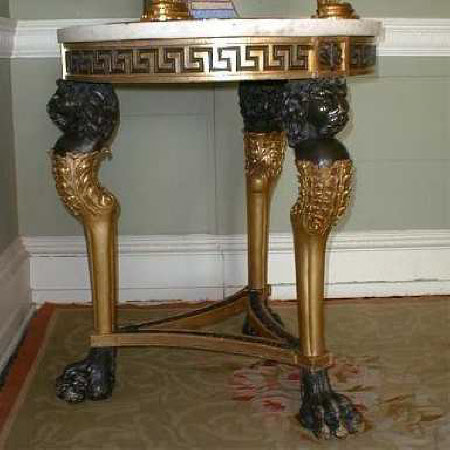 An ebonised and parcel gilt centre table with a specimen marble inlaid top, the base after a design by Thomas Hope (1769-1831) London, circa 1810. The circular top inlaid with a radiating design of specimen marbles, the frieze mounted with Greek key patterns and anthemions, on three lion headed monopodia, carved with foliage and hairy paw feet joined by curved stretchers carved with bell flowers.

This monopodia table is taken from designs published in Hope's 'Household Furniture and Interior Decoration' in 1807 (plate19 no.5 & plate 22 no.3) and reflects the work of the pre-eminent designer in the early 19th century. Hope was greatly influenced by his extensive Grand Tour travels across Europe and his Duchess Street home became the London showcase for his vision of antiquity across different cultures, incorporating Egyptian, Greek, Roman, and Indian elements. Hope officially opened his home in 1802 to visitors, and the Prince of Wales made an appearance at the grand opening. Hope went on to publish his designs in 1807 with full measurements as a way to encourage accurate imitation of his work. His publication was notable for the manner in which it represented furniture designs in outline only, eliminating any sense of depth, shadow, or stylistic contrasts. Hope’s decision to depict his designs in this way reflects his fundamental allegiance to the Neo-classical aesthetic. James Weedon (November 2018)