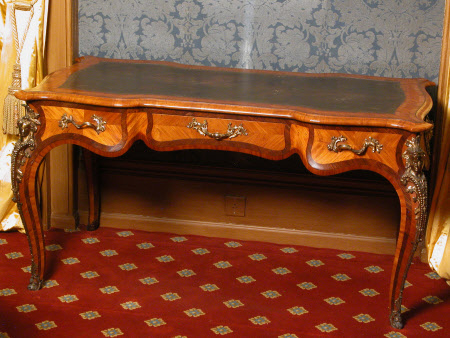 An ormolu-mounted, bois satine and kingwood bureau plat, English, circa 1830-1850. In the manner of Town & Emanuel. Of inverted breakfront and serpentine outline, the top with moulded edge, crossbanded border and inset with gilt-tooled green leather, a faux Royal cipher to each corner, the quarter-veneered frieze with central drawer flanked by false drawers and the opposing frieze all as false drawers, all with ormolu handles, each end frieze applied with a bold ormolu Bacchic mask, standing on cabriole legs headed with ormolu mounts modelled as male and female busts, the former wearing a hat, the latter wearing a floral bouquet, trailing to sabots.

The faux Royal cipher that is present at each corner of the gilt-tooled leather surface is intriguing. The interlaced double 'LL' is the French Royal cipher used by Louis XIV and Louis XV but the crown above has only elements of the French Royal crown (two fleur-de-lys instead of five, four arches instead of five), thus rendering it an imitation only. The Louis XIV, XV and XVI furniture styles were again very fashionable in the 1830s and 1840s and firms such as Town & Emanuel of New Bond Street, London (fl.1830-1849) cultivated the British aristocratic taste for such furniture by producing high quality copies, which included small tables, bureau plats and items in 'buhl'. Labelled examples are recorded in the Royal Collection, the National Trust collections at Hinton Ampner (NT 1529727) and the Burghley House collection. See also a similar high quality bureau plat, also with frieze masks illustrated in C. Gilbert Pictorial Dictionary of Marked London Furniture 1700-1840, FHS 1996, plate 914.

Visible in an 1881 photograph of The Drawing Room when it was Disraeli's library.