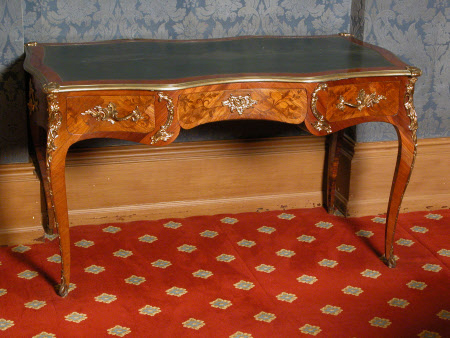 An ormolu-mounted, floral marquetry, bois satine and kingwood bureau plat, English, circa 1830. Branded EHB for E.H.Baldock. Of inverted breakfront and serpentine outline, the top with brass edge and foliate corners, a crossbanded border and inset with gilt-tooled green leather, the friezes set with marquetry of trailing leafy branches, three drawers and opposing false drawers, all with ormolu handles and later Bramah locks, standing on cabriole legs headed with ormolu mounts of pierced foliage, trailing to sabots.

Edward Holmes Baldock (1777-1845) Edward Holmes Baldock is listed in London Trade Directories of the period in various capacities. He first appears listed at 7 Hanway Street in 1805 described as a 'dealer in china and glass' and by 1821 as 'an antique furniture and ornamental furniture dealer'. By 1826 the various facets of the business included '....buying and selling, exchanging and valuing china, cabinets, screens, bronzes, etc'. Baldock's business seems to have largely involved trading in foreign items and from 1832-1837 he was the purveyor of earthenware and glass to William IV and later purveyor of china to Queen Victoria from 1838 until his death. He is known to have repaired, remodelled and adapted furniture, often 18th century pieces, as well as make reproductions and provide designs for new furniture. The items that have the EHB brand may have been made by him but there is no documentary proof. He may have sub-contracted to specialists such as Robert Blake, rather in the manner of the 18th century French 'marchands-merciers' such as Daguerre. Baldock's brand EHB is to be found on genuine 18th century furniture as well as furniture from the 1830s which he commissioned, thus the EHB brand should be likened to a retail mark. A comparison between two documented and closely similar bureau plats is interesting. One, at Goodwood House, has the label for Messrs Blake of 8 Stephen Street, Tottenham Court Road. The other, supplied to the 5th Duke of Buccleuch by Baldock in 1841, has the EHB brand. Some sort of working relationship or sub-contracting to the Blake family can be assumed (Martin Levy, Furniture History Society Newsletter May 2005). Another bureau plat with the EHB brand, similar to the Disraeli table, was sold Bonham's, Fine English Furniture, 11 March 2009, lot 114 with a provenance to Lord Lucan.