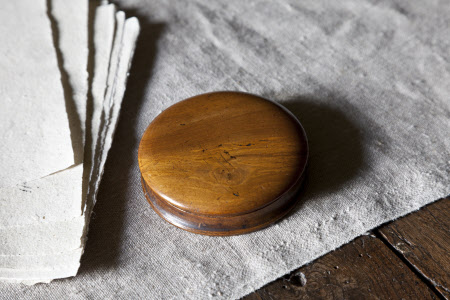 This snuffbox is special to the Manor because of its wood. It was made from the tree which inspired Newton’s theory of gravity. The first written account of an apple being the inspiration appears in notes on Newton's life collected by John Conduitt in 1726 the year of Newton's death. It states that “he first thought of his system of gravitation which he hit upon by observing an apple fall from a tree”. We know there was a specific tree as one of our books on display ‘The Soke of Grantham’ (3021129) written by Edmund Turnor in 1806 states in a footnote that “the tree is still remaining and is showed to strangers”. The tree was cared for by the Woolerton family who were the tenant farmers from 1733 to 1947. Although the tree was blown over in a storm in 1816 the remaining portion re-rooted and grew into the tree which continues to inspire visitors today. In 2010, a piece of the famous apple tree was launched into space on the Space Shuttle Atlantis.

A mid 19th century snuff box made from wood of the apple tree at Woolsthorpe.