The funeral procession of Arthur, Duke of Wellington. 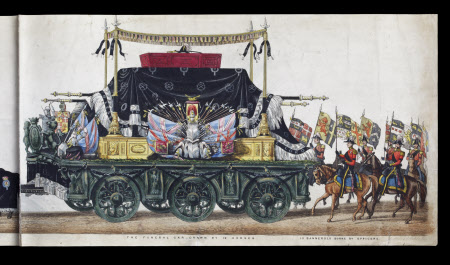 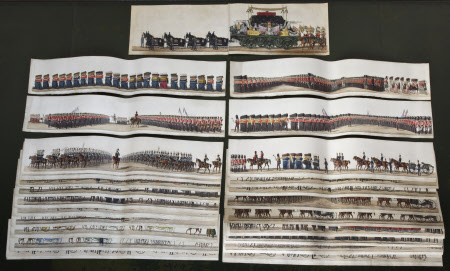 When the Iron Duke died in September 1852, his great age and his iconic status as Victorian England’s preeminent national hero naturally required a great state funeral. Nelson had lain in state int the Royal Naval Hospital at Greenwich, before being borne to St Paul’s for burial (see NT 3048619). Wellington’s lying-in-state was at the Royal Hospital, Chelsea, but because Parliament was not in session when the Duke died, it was more than a month before the architect C.R. Cockerell was ordered to make the arrangements. In parallel, the Lord Chamberlain, Lord Ester, was instructed to commission a magnificent funeral car, and first approached the architects Owen Jones and Digby Wyatt to request a vehicle which ‘ should do justice to the immense services of this illustrious individual and at the same time do credit to the taste of the artists of England’. Neither man was able to accept the commission, which was eventually given to administrator and inventor Henry Cole and artist Richard Redgrave, though Redgrave was later to admit that the designs were essentially the work of the great German neoclassical architect Gottfried Semper (1803–76), perhaps best known for the magnificent opera house of 1838–41 in Dresden, but since 1850 a political refugee in London, Drawings survive which suggest that Semper’s role was, if anything, even more significant than his English colleagues gave him credit for. The completed car was 5.15m (17 ft) high and 8.2m (27ft) long and was drawn by 12 black horses lent by Booth’s gin distillery. The ultimate precedent for a gigantic funeral chariot of the kind designed by Semper was the triumphal car which had carried the body of Alexander the Great from Babylon to Alexandria in 363BC. Descriptions of this vehicle have survived from antiquity, and there were various attempts made to reconstruct it from the eighteenth century onwards, but there were also English precedent, notably the examples designed for the funerals of military heroes such as Cromwell (1658), Marlborough (1722) and of course Nelson (1806). Lord Fairhaven was especially interested in the Napoleonic era, but he was clearly also interested in the funeral obsequies of great men and women. His library includes a number of books on the subject, and the Anglesey Abbey print collection also contains engraved funeral processions of Princess Charlotte (1818) and Frederick, Duke of York (1820), a genre of publication ultimately derived from Renaissance models such as the printed funeral roll of the Emperor Charles V (1559), and the rather similar ‘Magnifique Entrée de François d’Anjou en sa ville d’Anvers’ (1582), both published in Antwerp by Christophe Plantin. So the Wellington funeral roll was a very late example or an unusual genre of publication with much earlier antecedent’, and was in fact the very last thing issued by the Ackermann firm before its final dissolution in 1855. One would expect to find the individual sheets of lithographs jointed together, and the whole procession – over 20m (70ft) long – to be stored rolled up in a cylindrical box, but Fairhaven appears to have purchased the original proofs, which remain separate and are stored flat in the box which was probably made for him. Text adapted from Mark Purcell's entry in 'Treasures from Lord Fairhaven's Library at Anglesey Abbey', 2013, cat. 39, pp. 124-7.