The microcosm of London. 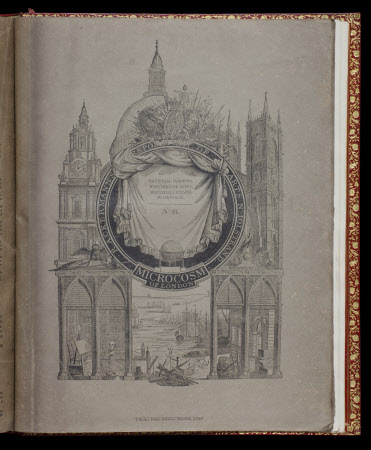 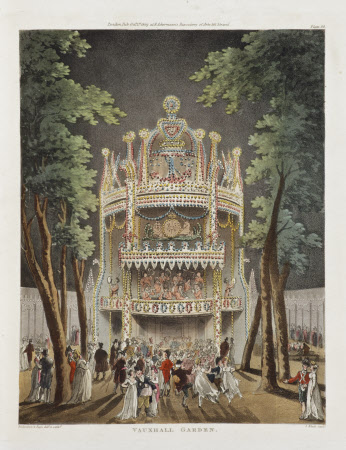 'The Microcosm of London', London: printed by R. Ackermann, [1808–10]. Binding: Gilt-tooled goatskin, signed by Rivière, with the original printed wrappers bound in.

Rudolph Ackerman was born in Saxony in 1764 into a family of saddlers. After a short apprenticeship he left for Dresden at the age of 18 to begin his career as a carriage designer. It was in this capacity that he arrived in London in 1787; 18 years later he would design the funeral car for Lord Nelson (see NT 3048619)). In a varied career he also ran a drawing school, invented a system for waterproofing leather, cloth and paper, and devised a machine for distributing anti-Napoleonic propaganda across Europe by balloon. The drawing school soon became ‘The Repository of Arts’ in the Strand, selling prints, fancy goods (made in the early days by high-ranking refugees from the French Revolution) and art books. An illustration of this establishment in Ackermann’s magazine of the same name (vol. 1, 1809) suggests that his wares appealed strongly to the growing middle classes of the time, especially to women. From 1813 the Repository was also the venue for a weekly ‘conversazione’ for artists, writers, patrons and distinguished visitors to London but Ackermann’s name is now most closely associated with colour-plate books, owing to the magnificent series of typographical works with coloured aquatints which he produced from 1808. ‘The microcosm of London’ was the first of these, appearing in 26 monthly parts from 1808. The book seems to have had its origin in a scheme by the architectural draughtsman A.C. Pugin (1762–1832) and his wife for a book entitled ‘Views of London and Westminster’. In the finished work the text was by professional writers W.H. Pyne and William Combe, but it is doubtful whether anyone has ever bought the book for the text. The chief interest lies in the illustrations, which combine the talent of two very different artists, Pugin himself and the caricaturist Thomas Rowlandson (1756–1827). Ackermann explained his reasoning in the preface to the first volume: "The great objection that men fond of the fine arts have hitherto made to engravings on architectural subjects, has been, that the buildings and figures have almost invariably being designed by the same artist. In consequence of this, the figures have been generally neglected, or are of a very inferior cast, entirely and connected with the other part of the print…" Rowlandson added his vigorous drawings and figures in contemporary dress to Pugin’s renditions of famous London sites, and the illustrations were engraved by five different craftsmen and coloured in Ackermann’s own workshop. The total cost of the 104 engravings was around £2600; the complete work in three volumes retailed for the considerable sum of 13 guineas. The result was described by R.V. Tooley as ‘one of the great colour plate books… a carefully selected copy should form the corner-stone of any collection of books on this subject’. Lod Fairhaven’s copy, previously owned by the industrialist Henry Harvey Frost (1873–1969), could not have been more carefully selected; Tooley described it as ‘the finest copy … I have seen’, noting the presence at the back of the original part-wrappers, a rare survival. William Hale, 2013