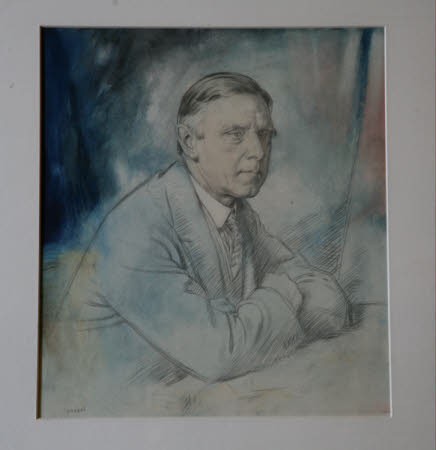 Pencil drawing and watercolour on paper

At Mottisfont Abbey, GIlbert and Maud Russell entertained a circle of artists, writers and politicians. Maud had portraits made of her by John Singer Sargent, Sir William Nicholson, Ambrose McEvoy and Henri Matisse (although she professed herself to be ‘horrified’ by how Matisse had depicted her). They also commissioned Rex Whistler to decorate the drawing room at Mottisfont in his romantic and whimsical style. This is one of only two known portraits of Gilbert Russell (the other is CMS 1954199), and for this one he sat for Orpen in Paris in early 1924. From his wife Maud's engagement diaries, the couple arrived in Paris on 27 February 1924, staying at the Ritz Hotel and Gilbert sat on 28, 29 February and 1 March. They returned to the UK on 2 March suggesting the visit was largely for this commission. There is no indication that Orpen ever painted an oil of Gilbert Russell, and this appears to have been an informal, yet accomplished study, rather than a preparatory sketch for a formal oil portrait. [References to Maud's engagement diary provided by Emily Russell]