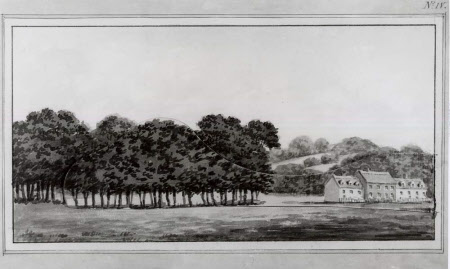 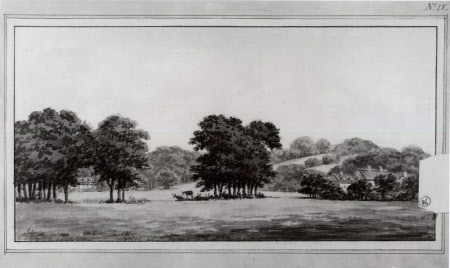 The row of cottages shown in this view, known as Brick End, survives in the park at Wimpole to the north of John Soane’s model farm. Today it comprises four eighteenth-century semidetached cottages, with a nineteenth-century house in-filled at the centre. Repton’s view, from the south-west, is taken from a point to the north of the walled garden where, according to the 1800 map, a screening plantation should already have existed. Repton writes: ‘There is another row of cottages consisting of a red centre with white wings which would perhaps be sufficiently broken and concealed by planting a few large trees at a proper distance to inclose the yards which are now too often rendered unsightly by linen and other nuisances’. This slightly prissy insistence on screening the workaday is typical of Repton’s polite aesthetic which in his earlier Red Books saw him keen to make a distinction between working farm buildings and the dignity of a landscape park. In his Red Book for Courteenhall of 1793 he had gone so far as to suggest that cornfields and cowbyres evoked ‘the sordid idea of yielding profit’. In 1804, in the Red Book for Longleat, Repton articulated the principle that he employed at Wimpole, that is: if a building was hidden away it might be ‘useful without affecting to be ornamental’, but if it was conspicuous ‘it should be ornamental’. Catalogue entry adapted from David Adshead, Wimpole Architectural drawings and topographical views, The National Trust, 2007