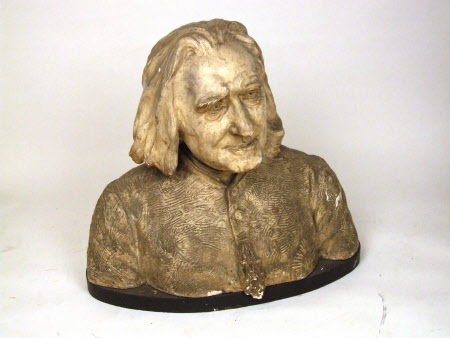 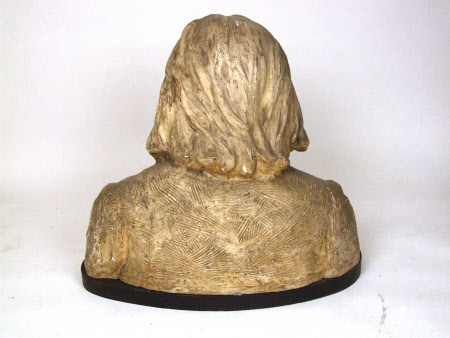 Plaster bust of Franz Liszt (1811-1886) by Sir Joseph Edgar Boehm (1834-1890), c.1886. Portrait bust of the composer in old age, modelled by Boehm when Liszt visited London in 1886. Sitter is square on with his head inclined slightly to his right, looking left. Truncated below shoulders, with shoulder-length hair, his coat decorated with the Order of the White Falcon (Ordens vom Weissen Faulken) also known as the Order of the Vigilance. The bust is mounted on an oval wooden base.

In 1886 the renowned composer, musician and conductor, Abbé Franz Liszt (1811-1889), visited England to great acclaim. His arrival was announced in many papers and journals who recorded his visit with interest. The Musical Times described his visit as an ‘occasion to be turned into a time of universal rejoicing and hero-worship.’ (1 May 1886). Liszt stayed in England for nine days, and during that time he undertook a variety of public appearances, including an audience with the Queen at Windsor Castle. During his stay in London, Liszt gave a number of sittings to Sir Joseph Edgar Boehm, who sculpted a bust of him; the bust was immediately exhibited at the Grosvenor Gallery in London. According to The Era (7 May 1887) Boehm exhibited a plaster bust at the Grosvenor Gallery in 1886, and the following year he exhibited a marble bust of Liszt at the same gallery, ‘the permanent replica of the plaster cast exhibited last year’. Boehm produced a number of plaster busts of Liszt which differ slightly from each other, three of which are in the collection of the Victoria and Albert Museum (no’s 1780-1892, 1781-1892, 1782-1892). There is also a version in the collection of the Royal Academy of Music (2003.1804). Liszt is portrayed life size, with his head slightly tilted, his hair long about his shoulders, his coat decorated with the Order of the White Falcon (Ordens vom Weissen Faulken) also known as the Order of the Vigilance, bestowed upon him by his patron Karl Alexander, Grand Duke of Saxe-Weimar-Eisenach. The bust was well received by the press, and its completion was remarked upon in the newspapers up and down the country. The Aberdeen Weekly Journal reported on July 8 1886 that ‘Mr Boehm has now finished the famous Liszt bust in three sizes. The likeness is wonderful’. Anna Moore (December 2017)