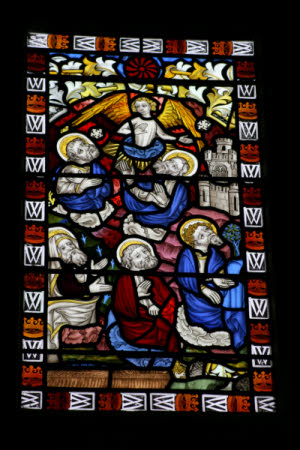 A stained glass panel depicting The Apostles Assembled. A copy of a 15th century English panel, made by Dennis King in 1983. 1982 replica of a fifteenth century stained glass panel from the East window of St Peter Mancroft, made by Dennis King (Kings of Norwich). Panel depicts the Assembled Apostles. Five apostles look towards an angel who gestures towards a castle on the right side - the heavenly kingdom. Scrolling floral pattern with a sun in the centre above scene, outer borders of repeated crowned monogram overlapping ‘WW’ for William Wykeham.