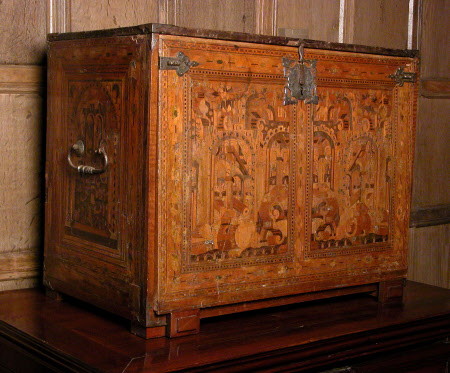 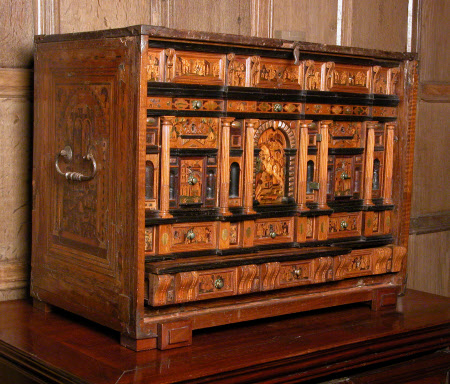 A marquetry cabinet, South German, Augsburg, circa 1570. Profusely inlaid throughout with architectural scenes, foliage, fruit and geometric motifs, the fall front (now detached) depicting meandering leafy tendrils and three-dimensional scrolls within borders, opening to reveal an arrangement of eight variously sized drawers around a central door depicting a rearing horse with rider and castles beyond within an arch. The long drawer at lower left pulls completely out as a hinged writing slide with brass supports behind to vary the angle, and with three concealed drawers beneath, large one on left, 2 small ones to right. The columns across the middle section pull out to reveal secret drawers within. The sides and hinged top also depicting buildings within arches and outer foliate borders. Iron carrying handles, shaped lock-plate and corner locking bolts.

Augsburg Marquetry Furniture This is a very good example of the extraordinarily fine and intricate marquetry that the South German city of Augsburg became so famous for at the end of the 16th century and on into the 17th century and whose wares were widely exported. Marquetry, influenced by Italian intarsia techniques, was adopted throughout Germany but items from Augsburg were acknowledged as the finest. These cabinets remain very desirable and sought after today. The contemporary term for this type of cabinet was ‘schreibtisch’ (writing table) and it served as a writing desk that could at the same time be used to store precious belongings and confidential papers. The front drops down on hinges to form a surface for writing or the examination of whatever was kept in the cabinet, although here it has been adapted to doors. Many would have carrying handles at the sides, so they could be moved around easily. The intricate and elaborate marquetry with which the larger cabinets are decorated on all sides immediately marked it out as a fashionable luxury item, reflecting the status of its owner as a sophisticated patron of the arts, particularly as such cabinets were for their owner’s personal use. Indeed, cabinets of this kind may arguably be the earliest kind of international luxury furniture made in large quantities anywhere in Europe. Augsburg was an important banking and trading city with a significant market in luxury goods, especially goldsmiths’ work and printed designs published elsewhere were readily available to all craftsmen. From the middle of the 16th century, Augsburg had witnessed an extraordinary ascendance as a centre of furniture production for the international market, a new phenomenon at the time. The development of marquetry contributed to this prominent position, helped by the availability of a large variety of indigenous woods and also the invention of improved kinds of saws and other equipment. Augsburg specialised in intricate mechanical devices such as locks, crossbows and clocks and the fine blades needed to cut clock gears, for example, could also be used in the cutting of marquetry. Augsburg marquetry almost invariably depicts fantastical ruins and abstract designs, as is the case here. In 1567, a collection of designs by Lorenz Stöer with perspective views of ruins combined with strapwork was published in Augsburg. Entitled ‘Geometria et Perspectiva’, it became a useful reference for furniture-makers. These ruins may have had a significance as vanitas symbols, suggesting the vanity of human endeavour. Historical, allegorical and biblical scenes were also used as subject matter.There are similar cabinets in the National Trust collections at Anglesey Abbey (NT 514375) and Snowshill Manor (NT 1331983 and NT 1331924).

Sudeley Castle, Gloucestershire. Given to the National Trust with Snowshill Manor in 1951 by Charles Paget Wade.