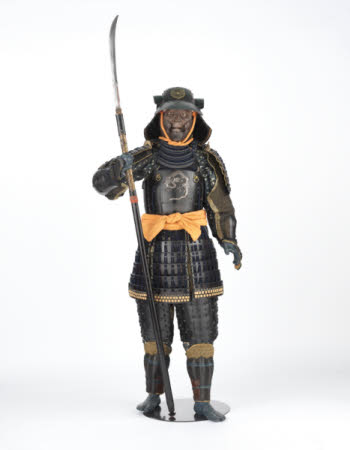 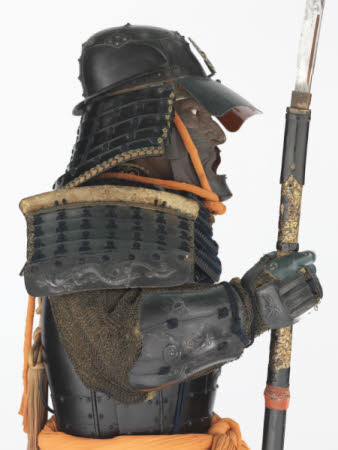 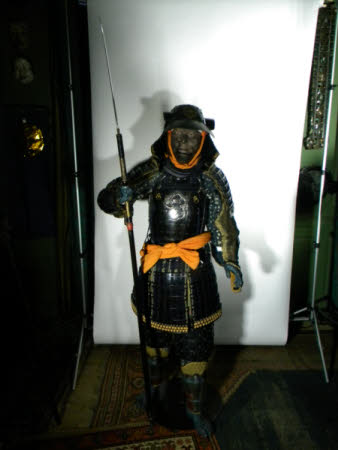 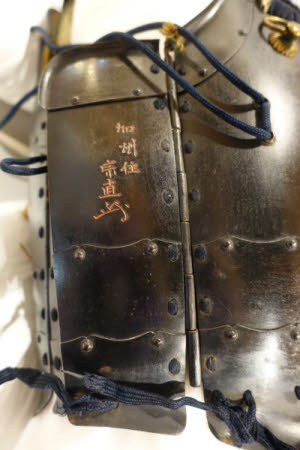 Japanese samurai armour is both highly distinctive and powerfully intimidating. With its scale-like metal plates, ‘horned’ helmet and complete face mask, it was designed to instil fear into enemy forces while providing excellent protection for the wearer. The armour shown here, however, was not made for military combat but for ceremonial procession. It dates from a peaceful period in the 1830s, when it was necessary for samurai (military lords) to pay homage at the court of the shogun (military dictator). The suit was made in the province of Kaga and bears the signature of a talented master armourer called Kashu ju Munenao, who beautifully decorated it with creatures, including crickets and dragonflies. While the helmet, body and sleeves are matching, the mask and shoulder guards actually come from a different suit. It was purchased for the quality of the craftsmanship by the collector and illustrator Charles Paget Wade (1883–1956) in Wymondham, Norfolk, in the early 20th century and displayed at Snowshill Manor, his house in Gloucestershire, which he gifted to the National Trust in 1951.

This fine samurai armour was made in about 1830 in the Japanese province of Kaga, which was an important centre of armour production with its own styles and characteristic features. This armour bears the signature of a senior armourer, Kojima Munenao.1 The armour was made in an era of enforced peace when regional lords were required to spend half their time at the court of the shogun (or military dictator) and put on impressive displays as they processed there. The Maeda family who ruled Kaga province, where our armour was made, were rich. Up to 3,000 people were involved in the Maeda lord’s march to the shogun’s court. More than a thousand samurai, plus servants would accompany him in procession. There was competition to put on as brilliant a show as possible. Colourful clothing was made specifically for these events. During this peaceful period the arts of lacquer, metalwork, and textiles reached extraordinary levels of artistic creativity, as demonstrated on this piece. These rich parade armours had no need to be practical as there was virtually no fighting at this time. Only the helmet, body armour and sleeves are from the same suit; the mask and shoulder guards are interlopers. The helmet is made from large plates of iron riveted together. Attached to the base of the helmet is a deep conical neck guard of five black lacquered iron plates laced in dark blue, the lowest plate having a single row of red cross-knots and a row of variegated braids. The body armour shows several very characteristic Kaga features; many of the plates, which make up sections of the armour, have their outer edges cut in an undulating outline with small V-shaped notches between. On the front of the armour is an applied decoration in embossed iron splashed with a silver alloy (sawari) of a dragon curling around in a circle. The sleeves and gauntlets are embossed with a variety of creatures including a snail, butterfly, crickets and dragonflies. At the top of the sleeve, the upper plate is joined in two places with butterfly-shaped hinges, again a typical Kaga feature. (Julie Reynolds, 2021) Notes: 1 Catalogue note by Ian Bottomley, Curator Emeritus, Oriental Collections, Royal Armouries. See also Weber 1928, pp. 218 and 230, and Wisplewey 2004, pp. 416 and 554.

Purchased by Charles Wade in Wymondham, Norfolk, early 20th century; donated to the National Trust with the rest of the collection at Snowshill Manor, 1951.