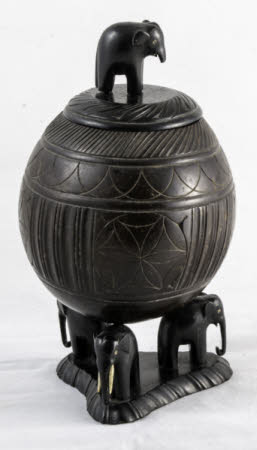 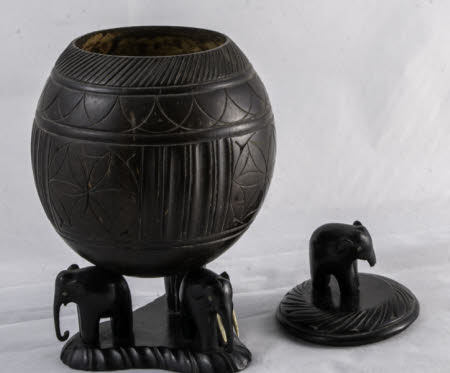 Coconuts have been carved to make decorative and utilitarian objects in Sri Lanka and India for centuries. This decorative container was probably made as a souvenir for the European market either in Kerala, India where coconut carving has a long history, or Sri Lanka, where the coconut palm is an important natural resource and a significant source of income generation. Theodore Mander (1853-1900) and Flora Mander (1857-1905), who built Wightwick Manor between 1887-1893, travelled to Sri Lanka (then a colony of the British Empire known as Ceylon) in 1896 for a 10-week trip. This container may have been purchased by them during their holiday.

A container carved from a coconut, supported at the base by three ebony elephants and surmounted by an ebony lid with an elephant finial. Made in Kerala, India or Sri Lanka (Ceylon), late 19th or early 20th century. A geometric pattern decorates the face of the coconut, it includes a six-petal rosette. Three ebony elephants decorate the base of the pot and one features on the lid. Only one of the elephants on the base has ivory tusks. The elephant on the lid is detachable and most of his trunk has been broken off and lost. Three screws in the bottom of the coconut attach it to the three elephants in the base. One of the screws is missing.