Drapery Studies for King Cophetua and the Beggarmaid 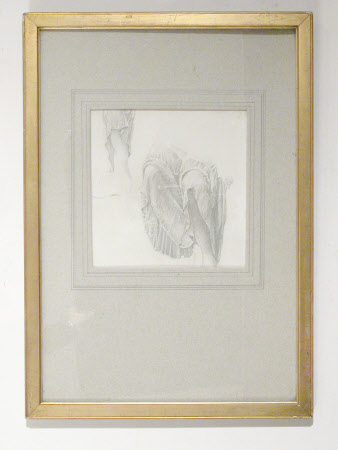 Black chalk, Drapery studies for King Cophetua and the Beggarmaid by Sir Edward Coley Burne-Jones (Birmingham 1833 - London 1898), circa 1883. Large numbers of preparatory studies for all aspects of a picture - basic composition, figures, and details - were an essential part of Burne-Jones' practice. These rejected designs for the beggar maid's dress are among numerous studies for the figures, clothes and details for King Cophetua. Another sheet of Drapery studies for the dress (WIG/ D/ 210), a sheet of Studies of feet (WIG/ D/ 208), both dated 1883, and a Study for the crown (WIG/ D/ 209) are all in the Wightwick collection, and there are similar studies in the Manchester City Art Gallery collection. The finished oil painting was completed and exhibited in England in 1884 and in Paris in 1889, to great acclaim. It was purchased by the Tate Gallery in 1900.