A Lady looking over her Shoulder 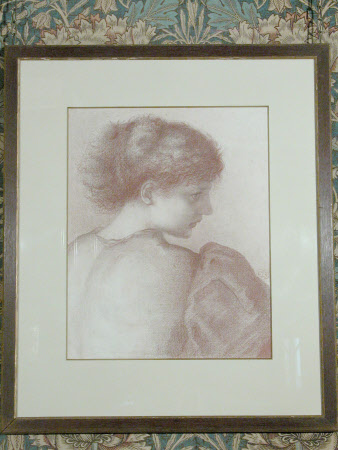 Red chalk drawing on textured paper, A Lady looking over her Shoulder by Sir Edward Coley Burne-Jones (Birmingham 1833 - London 1898), signed with initials in heart, lower right, EBJ, 1864. A portrait study of a young woman, possibly Maria Zambaco, from the back and looking over her right shoulder.

Drawing was central to Burne-Jones' art . This is one of five fine drawings (all from Miss Crawshay's collection) in the chalk technique characteristic of Burne-Jones's work of the mid-1860s. He used it both for figure studies for paintings such as those for Green Summer of c.1864 (Birmingham Art Gallery) and in highly finished drawings such as this, in what Stephen Wildman describes as "this style of soft chalk on fairly heavy paper, which gives a rich grainy texture to shadows and background." (Visions of Life and Love, Virginia 1995, No. 79) This and the other drawings also reflect Burne-Jones' growing interest in Italian Renaissance and classical art, especially after his second visit to Italy in 1862. Compositions and treatment of details, notably drapery, derive from his studies of Renaissance painting and Greek and Roman sculpture. The dress reflects the interest in decoratively-patterned folds of drapery characteristic of his later work. The pose, with the half-length figure turned to the right and the right arm raised but the head shown full face over the shoulder, is similar to that of the Study of a Girl (with puffed sleeves) [WIG/ D/ 50, Great Parlour], and Maria Zambaco [WIG/ D/ 49] and Head of a young woman [WIG/ D/ 51, both Indian Bird Room].

Typed label on back.