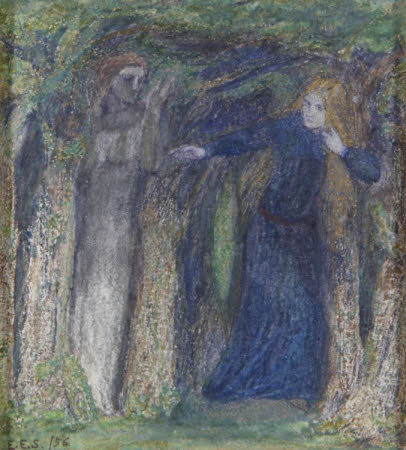 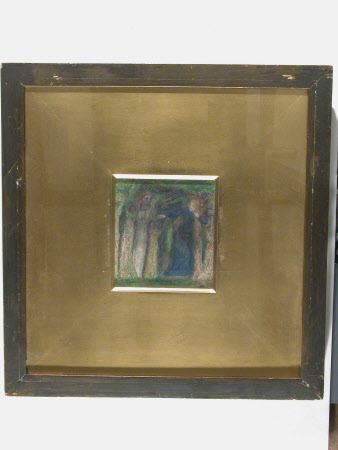 The painter and poet Elizabeth Eleanor Siddal (1829–62) began her career as a model for Pre- Raphaelite artists and features in some of their best-known paintings. Among them was Ophelia by Sir John Everett Millais (1829–96), for which she posed for long periods in a bath of water and caught a severe cold. However, she soon became the pupil of Dante Gabriel Rossetti (1828–82) and established her own artistic career. She subsequently gained the patronage of the influential art critic John Ruskin (1819–1900) and was the only female artist to appear in the 1857 exhibition of Pre-Raphaelites’ work in London. This image, showing a woman in a dark wood reaching out to a ghostly double of herself, appears to relate closely to Siddal’s poem ‘A Silent Wood’, particularly the lines: ‘Frozen like a thing of stone / I sit in thy shadow but not alone’. Her expressive, naive style was influenced by her study of medieval manuscripts and Italian art.

This one was one of the few artworks Siddal exhibited during her lifetime. Created in 1856, 'The Haunted Wood' was shown at the 1857 Pre-Raphaelite exhibition, organised by Ford Madox Brown at Russell Place, London. Siddal's poem 'A Silent Wood' may have inspired or been inspired by this artwork. The two figures appear similar and the ghost may represent a doppelgänger, a double of the living woman or a sign of approaching death. The image of the doppelgänger is found in poems admired by Siddal and her husband Dante Gabriel Rossetti (1828-82), such as Elizabeth Barrett Browning's 1836 'The Romaunt of Margret'. Browning (1806-1861) was one of the most famous and prolific poets of the Victorian period and Ruskin presented Siddal with a specially bound edition of Browning’s poetic sequence on Italian Liberty. Rossetti drew inspiration from Siddal's art and his later painting 'How They Met Themselves' shows a similar scene of a woman reaching for her mirror image. A copy of this composition by his studio assistant, Henry Treffry Dunn (1839-99), can be seen in the Swinburne cabinet in the Oak Room at Wightwick Manor. Ghosts and supernatural happenings were popular subjects in the Victorian era owing to the popularity of British folk legends and fairy tales. Many artists and writers were inspired by these traditions as opposed to the heroic narratives of classical mythology. Siddal did not receive a classical education and tenaciously sought out a profession in the art world. Initially working as a paid model for the Pre-Raphaelites, she became Rossetti’s pupil and earned the patronage of John Ruskin (1819–1900). Her artistic subjects reveal personal interests, particularly in medieval manuscripts and early Italian art.