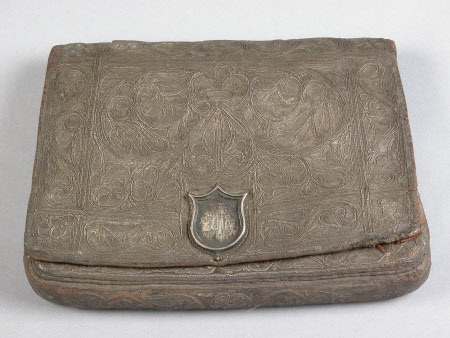 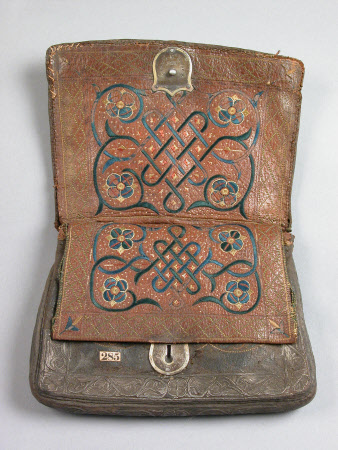 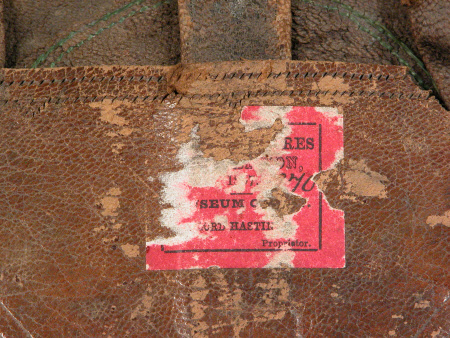 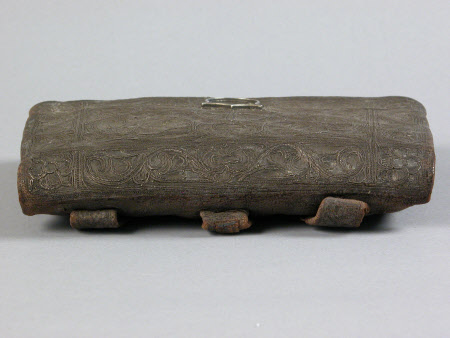 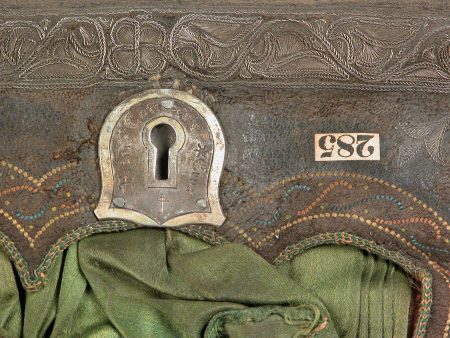 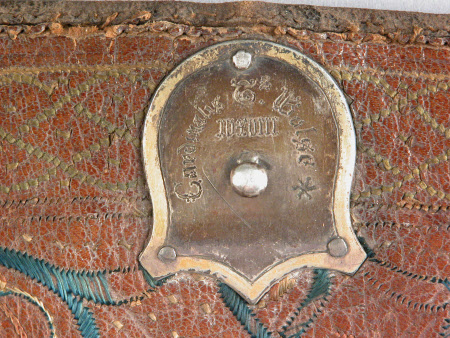 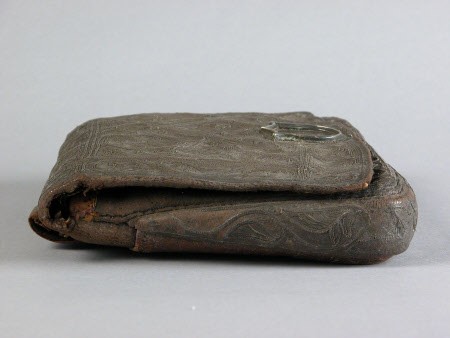 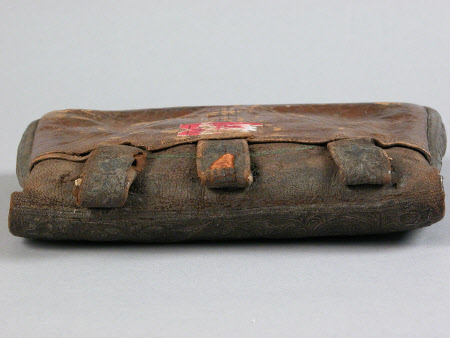 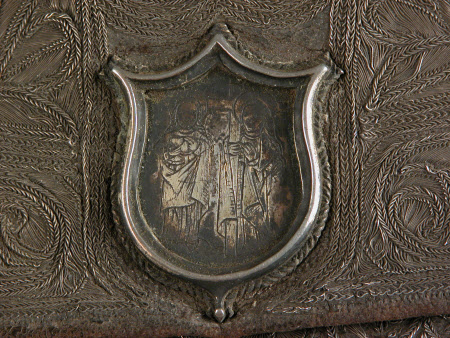 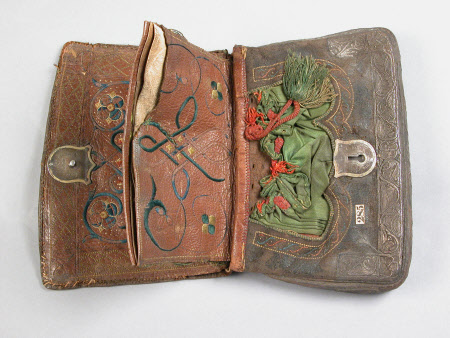 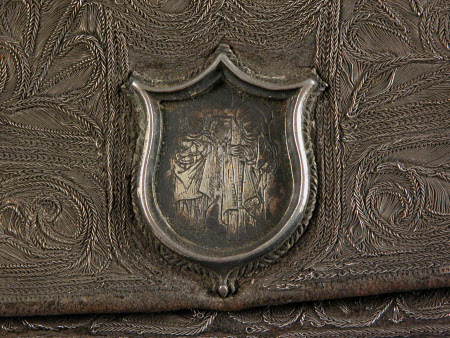 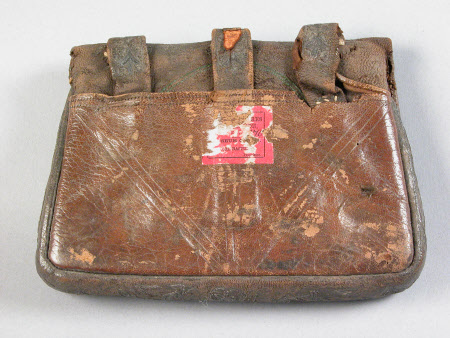 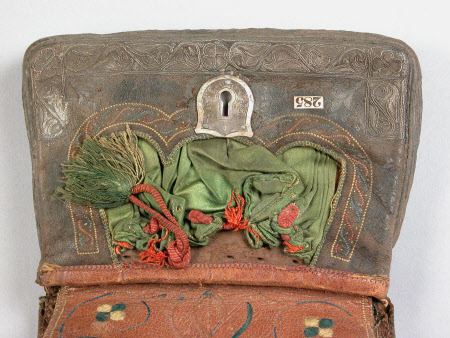 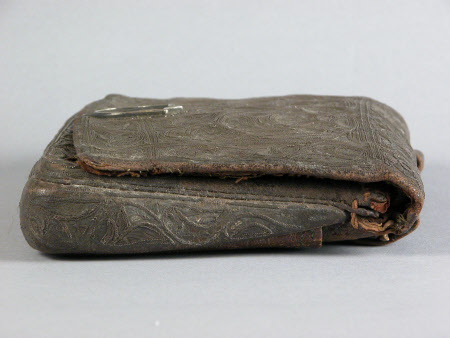 This stylish leather and silk purse decorated with silver thread dates from the early 16th century. It probably once belonged to Cardinal Thomas Wolsey (1470/1–1530), one of the most important and powerful men at the court of King Henry VIII. Wolsey served as Lord Chancellor and was the closest of the king’s advisers, but he fell out of favour and was accused of treason. Perhaps fortunately, he died before he could face charges. Purses like the one shown here would have been used not just for coins but also to store other precious personal items, such as gaming pieces, keys, seal rings and documents. They were usually attached to a girdle or belt with leather loops (hence the term ‘cutpurses’ to describe thieves or pick pockets) but fell out of fashion when pockets in clothes became more common later in the century. This purse includes typically Roman Catholic imagery on the front – a crucifix and chalice. The inner clasp bears Wolsey’s name and non-standard Latin numerals perhaps for the date 1518, when he was at the height of his political powers.

This leather purse probably once belonged to Cardinal Thomas Wolsey (1470/1–1530). It is decorated with an elaborate silver wire foliate pattern on the outside finished with a silver clasp engraved with two Christian figures; one holding a communion chalice, the other a crucifix. It has three leather loops for attaching to a belt on the back. The inside of the outer flap is decorated with silk embroidered flowers worked on the leather and inside the main compartment is lined with leather with a small draw-string pocket with a blue silk cord. Beneath this there is a second flap embroidered on both sides, open at the top and lined with kid leather. On the front of the purse is a green silk draw-string pocket, pleated to shape, with a red silk cord and green silk tassels. The green silk pocket is made from a fabric width with red selvedges at either side. The inner clasp is inscribed: ‘Cardinalis Ts. Wolse IVXVIII’ and ‘Fidei coticula crux’ [The cross is the touchstone of faith]. A paper label reading ‘No 285’ has been glued to the purse underneath the outer flap.

Made of leather and decorated with elaborate silver wire decoration, this purse is a rare and luxurious example of a once fashionable accessory worn by men of all classes. Purses, or pouches, were attached to girdles or belts with leather loops and were used to carry small high value or personal items such as documents, money, keys, combs or gaming pieces. Decoration could be ornate with stamp-impressed or embroidered patterns featuring ciphers, emblems or motifs that denoted the social status or profession of the owner. Two very similar purses to this example were discovered inside chests retrieved from Henry VIII’s sunken warship, the Mary Rose (81A2685; 81A1991). Despite their popularity in late-medieval and Tudor times, purses fell out of use as men’s fashion began to change in the mid-sixteenth century, replaced by inset pockets as breeches became fuller

Glued to the purse underneath the outer flap: '285' Inscribed on clasp: ‘Cardinalis Ts. Wolse IVXVIII’ and ‘Fidei coticula crux’ [The cross is the touchstone of faith]