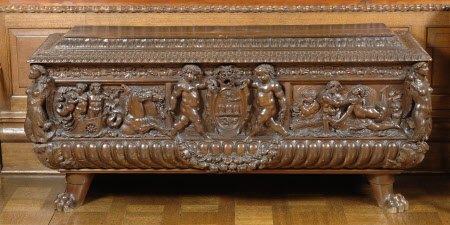 A carved walnut cassone, Italian, probably Venetian, 2nd half of the 16th century. The hinged raised paneled lid with carved mouldings and a null carved edge above a front centred by a pair of putti holding a crest and with Neptune and Amphitrite and horses and chariots carved in deep relief. With a gadrooned moulding below, raised on later lions paw feet.

Claudio Paolini in 'Il mobile del rinascimento, la collezione Herbert Percy Horne, Firenze' 2002, p. 22, illustrates a Florentine 16th century cassone of sarcophagus form on its original rectangular plinth base. It is unusual for a cassone of this date to retain the original bases as walnut is prone to rot and worm infestation. This example would most likely have been raised on something of similar form. Also Pedrini, 'Italian Furniture, interiors and decorations of the XV-XVI centuries' London, 1949, p. 127, fig. 112, for a related Florentine cassone of similar form, dating to the middle of the 16th century, (Bardini Collection, Florence). This type of Renaissance cassone derives from the ancient marble sarcophagi and Renaissance tombs, the latter often stood on elaborately carved supports and plinths. Supporting figures were often employed on these types of cassone, although they often held portrait medallions and wreaths. James Weedon (June 2018)

Acquired by William Bankes in Italy. Bequest of the estates of Corfe Castle and Kingston Lacy made to the National Trust by Henry John Ralph Bankes (1902-1981). NT ownership commenced from 19th August 1982