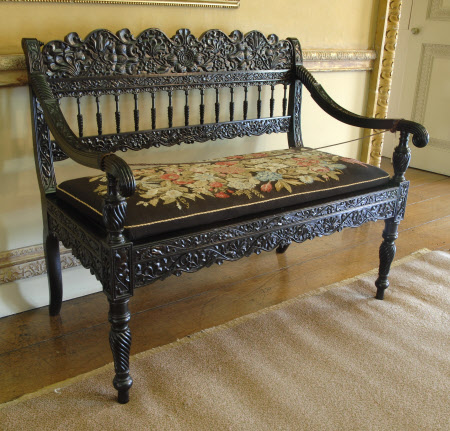 A settee, from a near set of seven pieces of carved solid ebony and cane seat furniture, Sri Lanka, circa 1830. The matching six open armchairs NT 1254465.1.1-.1.6. There are minor differences in the design of the settee and chairs. All having horizontal rails carved with Sri Lankan flowers and leaves, such as the pala-peti, or lotus, flower. The rear uprights also carved, and topped by scroll finials, and flanking a back filled with turned spindles. The arms downswept and partially spiral-carved, ending in scrolls and raised on spiral-reeded vases. The seats lined with cane and raised on spiral-reeded and ring-turned front legs and outswept rear legs.

Richly carved ebony furniture from India and Indonesia was much sought after in late 18th and early 19th century Europe, partly as a consequence of the misplaced belief that much of earliest specimens were English. It was much sought after for houses of the Tudor period and in the Gothic Revival style so fashionable at the time. A settee, reputed at the time to have been a gift from Elizabeth I to the Earl of Leicester, furnished William Beckford's (1760-1844) 'Lancaster State Bedroom', at Fonthill Abbey, Wiltshire, before being acquired for the Elizabethan mansion at Charlecote, Warwickshire in 1832 (NT 533023). Ebony bedrooms were also created at Warwick Castle, and at Montague House, London, while an ebony dining-room was introduced at Longleat, Wiltshire in the early 19th century. This fashion may have stimulated the emergence of markets for ebony furniture – in up-to-date styles – for Europeans in British Colonies like Sri Lanka, an island in the Indian Ocean southwest of the Bay of Bengal. In the 16th century, the island’s lucrative external trade was taken over by the Portuguese, who ceded control to the Dutch in the middle of the 17th century. In 1815, the British emerged as the dominant colonial force, and colonised the island until 1948, during which time it was known as ‘British Ceylon’. In 1948, Sri Lanka gained its independence and operated as a republic. During the British occupation of the island, Sri Lankan furniture began to be made in English styles and was ‘intended for consumption by officials, planters, merchants’ and high-status Sri Lankans. Much was exported, too, to be sold by dealers, and Sri Lankan furniture was received with great acclaim at many of the 19th century’s international exhibitions. However, the tendency for colonising powers to alter the creative output of the colonised people has been said to have had a detrimental effect on traditional craftsmanship and Sri Lanka’s furniture-makers can be seen as supplying a market for products which were closely defined by the European/British consumer and in which the producer had marginal input. Made after English furniture patterns, most of the flowers and leaves which decorate 19th century Sri Lankan furniture were indigenous species, a feature which Western consumers demanded. Whilst there is no record of when William Bankes (1786-1885) acquired this particular set of furniture for Kingston Lacy, he is known to have purchased two ebony chairs from Emanuel Brothers of Bishopsgate, London in 1838 (the bill shows he paid £12 3s 6d). By 1856, this set lined the walls of Kingston Lacy’s Saloon, complemented by two scroll-ended daybeds (NT 1254557) and a similar sofa (NT 1254558). (Megan Wheeler, August 2020)

Bequest of the estates of Corfe Castle and Kingston Lacy made to the National Trust by Henry John Ralph Bankes (1902-1981). National Trust ownership commenced on 19th August 1982.