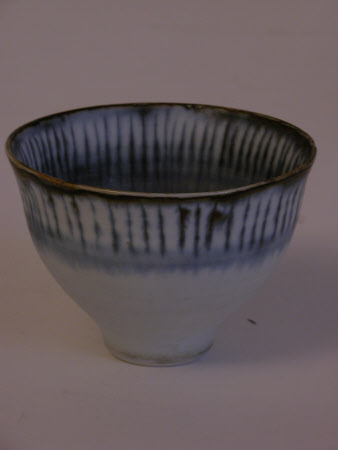 Marianne de Trey (1913-2016) did not start her career out in ceramics but rather in textiles which she studied at the Royal College of Art in the 1930s. Her husband Sam Haile, was a painter and potter and it was during his teaching post at a University in New York state that she first started to make ceramics. Returning from America after World War II, they set up a pottery together in Suffolk before moving to Shinner’s bridge in Dartington, former pottery of Bernard Leach. De Trey showed incredibly tenacity and skill in setting up this pottery and developing a sustainable business, particularly after the tragic death of her husband in a car crash in 1948 which left her a single mother . De Trey continued to pot at Dartington until the 1980s when she downsized though she continued to make until she was in her 90s. She was an active supporter of craft and ceramic schools, was a founding member of the Craft Potters Association and helped form the Devon Guild of Craftsman in Bovey Tracey, receiving an OBE for her work. De Trey’s background in textiles is certainly evident in her ceramics, which often distinguished her work from studio pottery contemporaries. Her approach to glazing and colour mixes was influenced by textiles and she used different techniques such as wax resists to achieve some patterns. Three pieces by De Trey dating to the 1980s exist in the Greenway collection. There are indications that Rosalind and Anthony Hicks, who gifted Greenway to the National Trust in 2000, were regular visitors to various potters related to Dartington and to the Devon Guild of Craftsmen, so they may well have known De Trey and purchased directly from her. (Alison Cooper, 2018)