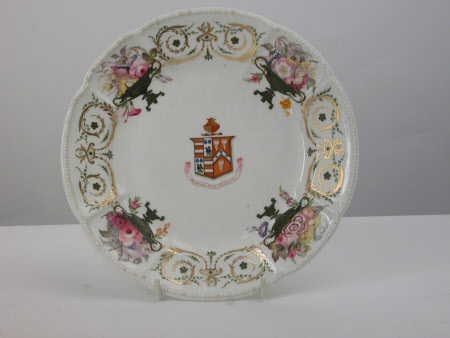 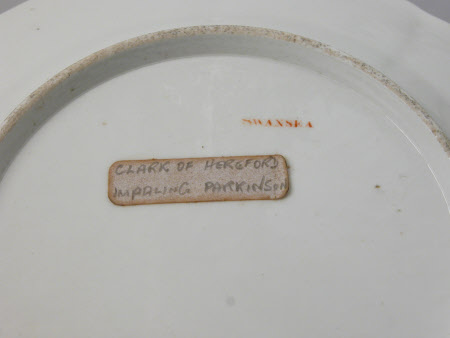 This plate is part of a large collection of Welsh ceramics brought to Greenway by Anthony Hicks from his parents’ house, Pwllywrach, and was made in Swansea c. 1814-1826. The Swansea factory had its origins in the 18th century when the Cambrian pottery was founded by William Coles in 1764. This factory found success making pieces that imitated the high quality basalt and creamware produced by Wedgwood in Staffordshire. The pottery was eventually taken over by Lewis Weston Dillwyn who, from 1814, employed the talented painter William Billingsley under whom the Swansea factory produced particularly fine work. Dillwyn continued to invest in the factory and experiment with the production of porcelain, producing a fine, glassy body. A large quantity of pieces of ‘blank’ Swansea porcelain was sent to London for decoration but the decoration on the border of this plate points to its decoration at Swansea, perhaps by the painter Henry Morris who copied many of Billingsley’s designs. The flower urns on this plate look to Billingsley’s ‘Prince Regent’ pattern for inspiration. Unusually, this plate also bears a coat of arms. Armorial porcelain was commissioned specifically at a cost; although the Swansea and Nantgarw factories did do such commissions, evidence suggests that they were far fewer in number than other factories and so examples, like this one, are comparatively rare. This plate is painted with the arms of Clark of Hereford impaling Parkinson (illustrated in W.D. John, Swansea Porcelain, 1958) and the motto ‘Frangas non Flectes’ meaning ‘I may be broken but never bent.’ (Alison Cooper, 2018)

Base of plate: SWANSEA printed in red