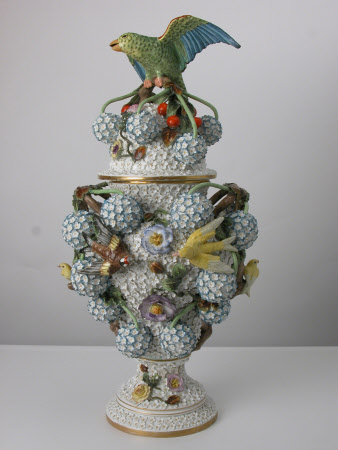 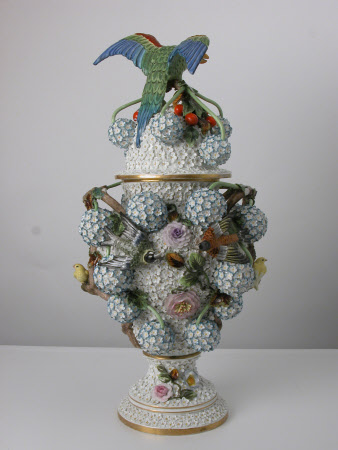 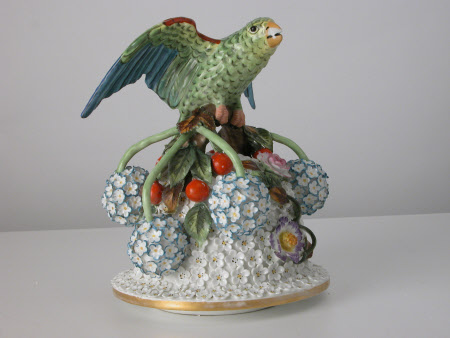 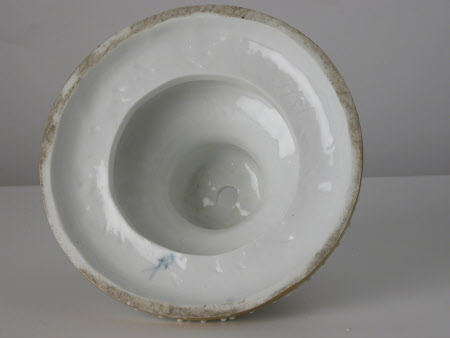 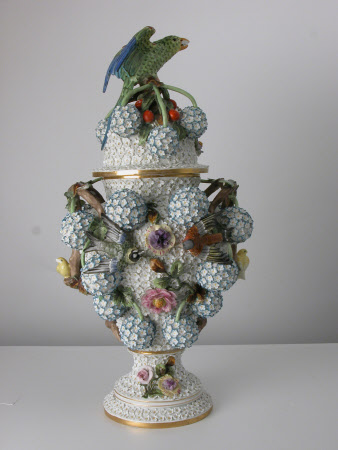 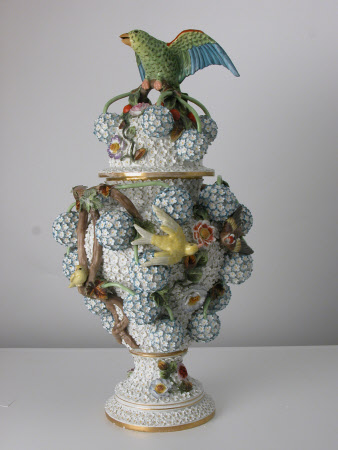 Vase and cover, one of two, porcelain, of baluster shape encrusted with snowball blossoms, flowers and birds, the domed lid with a parrot finial, French, possibly Samson, late 19th century, after a Meissen Schneeballen vase, c. 1740.

These Samson vases were made in France but are direct copies of originals made at the prestigious Meissen factory in Germany. Meissen was the first factory in Europe to produce hard-paste porcelain (like the Chinese) in 1708. The Meissen factory was therefore particularly pioneering and made many advances in both the manufacture and the decoration of porcelain. Johann Joachim Kändler started at the Meissen factory in 1731 as a modeler. He quickly rose through the factory’s ranks and it was under his artistic direction and with his skill of design that Meissen continued to hold a leading position in Europe. The type of vases described as ‘Schneeballen’ or snow ball vases were of his design, first made in 1741. Each vase had hundreds of flower (‘snowballs’) which were hand modeled and individually applied. This style was also particularly astonishing given that firing porcelain was (and still is) incredibly difficult; as a material, it shrinks by at least ¼ during the firing process which often causes slumping or cracking. To fire the delicate decoration of the snowball vases without flaws showed real technical accomplishment. Meissen set the standards by which other European porcelain factories would follow not only in the 18th century but well into the 19th century. With this prestige came a price tag and only the wealthiest could afford it. Edmé Samson (1810-1891) was a man who seized the opportunity to copy the best factories in Europe (although some of his products verged on forgery), opening his factory Samson, Edmé et Cie in 1845 in Paris. This factory produced a wide range of pieces, imitating factories from all over Europe and, in this instance, copying Meissen’s Snowball vases. Samson was able to do very well out of a surge in the antiques trade and an interest in collecting in the late 19th century. The collecting habits of Frank Miller – Agatha Christie's father – are evidence of this trade and it was undoubtedly Miller who purchased this pair of vases which eventually ended up at Greenway. (Alison Cooper, 2018)