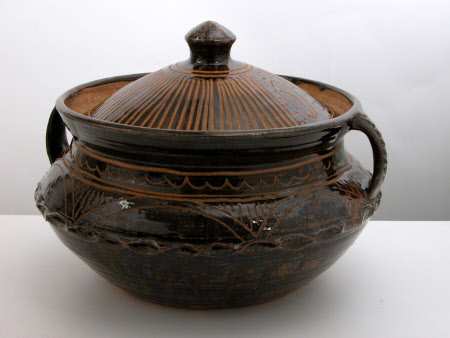 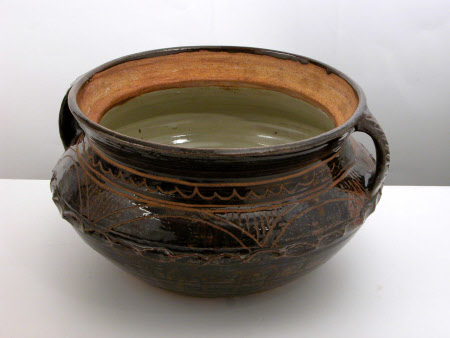 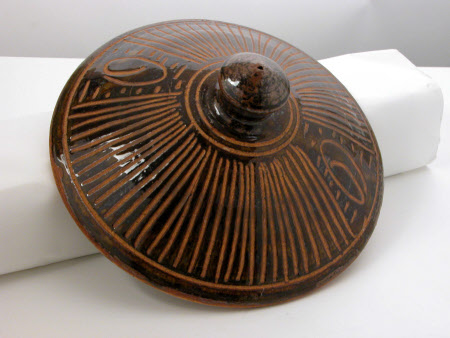 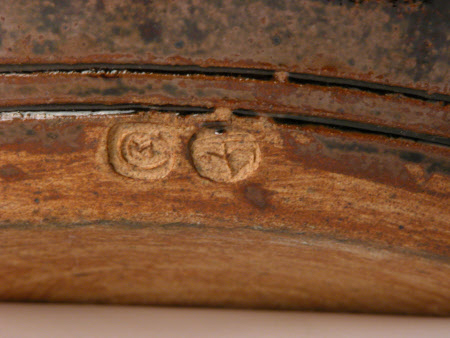 Michael Cardew’s name is synonymous with English studio pottery and slipware though much of his life was spent also working in West Africa. Born in London, Cardew’s family often visited North Devon and his father collected pottery. As a child, Cardew visited the famous slipware pottery of Edwin Fishley in Braunton and later was taught to throw by Fishley’s grandson. This early experience must have stuck with him because as soon as he finished studying classics at Exeter University, he started an apprenticeship at the Leach Pottery in St Ives, working with Bernard Leach. In 1926, he left St Ives to start his own pottery in Gloucestershire which was to become the Winchcombe pottery. Years later, he left this pottery to Ray Finch to move back to Cornwall and start, just before the outbreak of World War II, his pottery, Wenford Bridge, in Bodmin. The pottery, like most others, struggled to make money during the war and Cardew eventually accepted a post in the Colonial service as a pottery instructor in Ghana (then Gold Coast). He taught pottery at Achimota College in Accra, with responsibility for a pottery and tileworks, as part of a government-backed venture that aimed to help train students to supply the whole of West Africa with locally produced pottery. Leaving Accra in 1945, Cardew started his own pottery at Vume on the Volta river. Neither venture was successful, and he moved back to Wenford Bridge for a few years in the late 1940s. In 1950 Cardew was appointed Pottery Officer by the Nigerian colonial government, and set up the Abuja Pottery Training Centre at Suleja (then Abuja) He continued working for the Nigerian government after independence in 1960, eventually retiring to Cornwall in 1965. Cardew admired the techniques, style and decoration of Nigerian pottery, particularly Gwari pottery traditionally made by women. At the Training Centre local styles were combined with techniques taught by Cardew, including the use of wheel throwing and stoneware fired at higher temperatures. Cardew and his students, including Ladi Kwali, influenced each other to create hybrid objects fusing together traditional Nigerian styles with Cardew’s own English loves. This ‘Gwari’ pot is a prime example; based on a Gwari cooking pot (this shape became a standard product at the Abuja factory), the incised decoration is decidedly from the English tradition. Although these kinds of pots were made in Abuja, Cardew continued to produce this style on his return to Cornwall. The stamps on this one indicate that it was made at Wenford Bridge in Bodmin, probably in the late 1960s.

Introduced to the Property by Rosalind Hicks