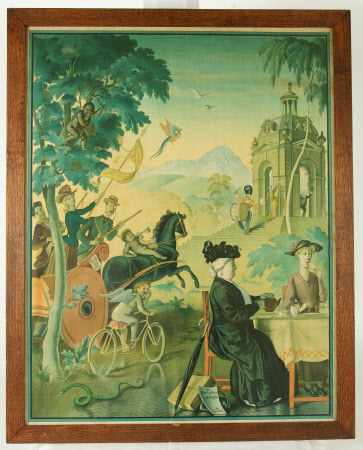 Lithographic print, Poster advertising the Tate Gallery Restaurant with murals by Rex Whistler by Rex (Reginald) John Whistler (Eltham 1905 - Normandy 1944), 1928. Two women take tea in the Tate restaurant, the floor of which blends into the restaurant's painted mural decoration, also by Rex Whistler, 'The Expedition in Pursuit of Rare Meats’ (1927).

In 1928 Rex Whistler was commissioned to design a coloured lithographic poster for London Underground, advertising the National Gallery of British Art, today known as Tate Britain. The poster takes as its subject the mural that Whistler had completed the year before for the Tate restaurant. [1] The poster depicts two well-dressed ladies taking tea at a table. A copy of the Tate Gallery catalogue is propped against one of the lady's belongings, suggesting that they are in the Tate restaurant itself. In trompe l'oeil fashion, the floor of the cafe dissolves into landscape of the restaurant mural, from which Whistler quotes and elaborates upon. Figures from the landscape attempt to call attention to the women, who remain oblivious to their efforts. These include a drummer descending the steps of an arched monument, a winged cherub on a bicycle, a cherub blowing a horn and a hunting party in a horse-drawn carriage. A self-referential note pinned to the side of the carriage bears the title of the restaurant mural: 'The Expedition in Pursuit of Rare Meats'. [2] In the top-left corner of the poster, a simianised figure in the branches of a tree overlooks the scene below. This instance of racist caricature is amplified in the full visual narrative of Whistler's mural, which includes episodic depictions of a black child being pursued, enslaved and chained behind a horse and carriage. Historically, the imagery in 'The Expedition in Pursuit of Rare Meats' has been described as 'whimsical and entertaining pastiche' [3] with the restaurant dubbed 'The Most Amusing Room in Europe'. [4] This latter description first appeared in 1927 and was adopted by the Tate for many years in interpretation of the mural, but was removed in August 2020. [5] Until 2020, acknowledgement of the racist caricature had not been formally noted in the catalogue description of this poster. (Gabriella de la Rosa, 2020) Notes [1] For an account of the commission and completion of the mural, see Heather Birchall, '"The Most Amusing Room in Europe": The Mural by Rex Whistler in the Tate Restaurant', The British Art Journal, vol. 6, no. 2, 2005, pp. 58–65. [2] The content of the mural is perplexing and incongruous. Upon its completion, Whistler collaborated with the novelist Edith Olivier (1872–1948) to author an explanatory narrative. 'A Guide to the Duchy of Epicurania: In Pursuit of Rare Meats' explains that the scenes depicted in the mural take place in the fictive land of 'Epicurania' ruled over by the 'Duke of Epicurania' where an expedition of people set out in search of 'rare meats'. [3] Swann Auction Galleries, Rare & Important Travel Posters, Oct 25, 2018 - Sale 2490, Lot 163. [4] Daily Telegraph, December 1927. [5] This quote was included for many years in the interpretation for the mural on the Tate's website, but was removed in August of 2020 when, as part of the global anti-racism movement following the death of George Floyd (1973–2020), The White Pube (the collaborative identity for British Art criticism duo Gabrielle de la Puente and Zarina Muhammad) drew attention to the images on their Instagram account.