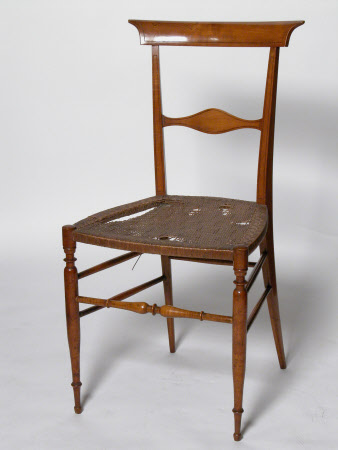 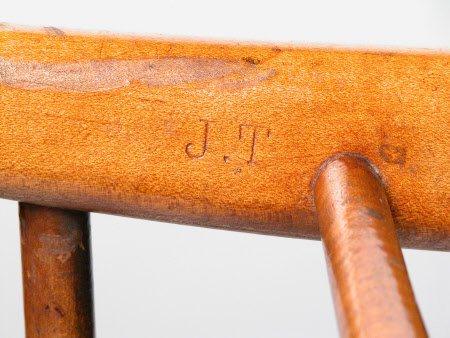 A chiavari, or rout, chair, one of a set of twelve, of varnished cherry, after, or possibly by, Giuseppe Gaetano Descalzi (1767-1855) of Chiavari, Genoa. Possibly made by him in Genoa, and early to mid-19th century, but one of the set (NT 1147226.11) is stamped ‘J.T’, possibly for the chair-maker or caner. This, and the fact that they were much-copied in the 19th century (and still are), means that it is possible that they were made somewhere else by a different craftsman. Of very lightweight construction, and with a bar toprail with curving ends on broadening rear supports joined by a horizontal splat with central swelling and flared ends. The back inlaid throughout with a darker line. The woven cane seat – original to some of the chairs – raised on slender ring- and baluster-turned front legs united by a conforming stretcher. The rear supports plain and tapering, and with a plain single rear, and pairs of side, stretchers. This chair with original seat.