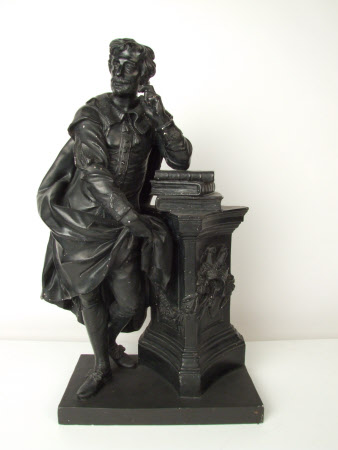 Plaster, bronzed; Edmund Spenser; attributed to the workshop of John Cheere (1709-1787); model c. 1750. The statuette of the poet Edmund Spenser (1552/53-1599) shows him leaning against a triangular pedestal, his elbow resting on three books. The pedestal is decorated with a trophy celebrating the art of writing.

A bronzed plaster statuette of the poet Edmund Spenser (1552/53-1599) attributed to the workshop of John Cheere (1709-1787). Spenser is shown in ‘van Dyck’ dress, standing leaning against a triangular pedestal, his elbow resting on three books on top of the pedestal, whilst with his right hand he holds up a swag of drapery. He lightly supports his head with his left hand, and looks to his right. The pedestal is decorated with a trophy celebrating the art of writing, with a coronet, a dagger (?), a quill, a sheet of paper, a branch of laurel. The statuette of Edmund Spenser is one of three figures of famous English poets in the Library at Ham House, the others John Milton and William Shakespeare (NT 1139983 and 1139984). The three figures were bought in 1756 by Lionel Tollemache, 4th Earl of Dysart, who made significant additions to the house, including building the famous Ham Library, the books from which were sold in 1938. The figures, particularly suitable subjects for a room devoted to books, are recorded in the Library in the 1844 inventory of Ham House, along with ‘Three plaister busts’ and two unspecified ‘fancy figures’, none of which are still at Ham. The three figures are part of a much larger group of statues of famous architects, artists and writers, most of whom worked in Britain, that were produced from around 1749 in the London workshop of John Cheere. Cheere was the younger brother of the sculptor Sir Henry Cheere (1703-81), who ran a significant business in monuments, statues and chimneypieces, employing numerous assistants. Lord Dysart certainly would have known John Cheere personally, since in 1739 he paid Sir Henry Cheere for work at Ham, as well as his other seat, Helmingham Hall. John Cheere began his working life as a haberdasher but by the later 1730s had joined his brother, developing a thriving business that he ran from workshops at Hyde Park Corner. During the 1740s and 1750s John Cheere was the dominant figure in the manufacture of high-quality lead figures, often for display in gardens. In their 1766 play The Clandestine Marriage, David Garrick and George Colman had one character exclaim that ‘You have as many rich figures as the man at Hyde Park Corner.’ (For Cheere, see Friedman and Clifford, The Man at Hyde Park Corner). Many of Cheere's works survive in National Trust collections. In producing his set of famous figures from British history, Cheere was responding to the eighteenth-century fashion for series of sculptures celebrating national achievement, seen perhaps in its most famous form in the series of busts adorning William Kent’s Temple of British Worthies at Stowe, created in c. 1734-35. Among the busts at Stowe are William Shakespeare and John Milton, but the series also includes monarchs such as Elizabeth I and parliamentarians such as John Hampden. Cheere’s series of modest-sized statuettes was clearly designed for use in libraries and similar spaces for intellectual thought, and accordingly the selection of subjects is more focussed on the arts. According to a letter sent by John Cheere in July 1754 to a Yorkshire patron, John Grimston of Kilnwick Hall, there were twelve models available: ‘Homer, Virgil, Horace Demosthenes, Socrates, Shakespear, Chaucer, Milton, Dryden, Spencer, Locke, Newton, Tillotson, Boyle.’ (The Man at Hyde Park Corner, Appendix D). In addition, similar figures of artists, Inigo Jones, Anthony van Dyck and Peter Paul Rubens, were also available and are included within the subjects in the most extensive extant series of these figures, the signed series also dated 1749, formerly at Kirkleatham Hall, some of which are now in York City Art Gallery (for the Shakespeare, Spenser and Milton, see The Man at Hyde Park Corner, nos. 45, 52, 54). A similarly conceived series of library sculptures is the set of sixteen bronzed plaster busts at Belton House (NT 436763) by an anonymous sculptor, installed in around 1734. For his figure of Shakespeare, John Cheere’s model was the work of another sculptor, Peter Scheemaker’s famous monument in Westminster Abbey. For the Milton and the Spenser on the other hand, the invention may have been Cheere’s, although both sculptures in many respects depend from the highly influential type defined by Scheemakers in his Shakespeare monument. Jeremy Warren December 2021

Acquired in 1756 by Lionel Tollemache, 4th Earl of Dysart; recorded in 1844 in the Library, ‘Three Plaister figures of Milton, Dryden and Shakespeare.’; thence by descent, until acquired in 1948 by HM Government when Sir Lyonel, 4th Bt (1854 – 1952) and Sir Cecil Tollemache, 5th Bt (1886 – 1969) presented Ham House to the National Trust. Entrusted to the care of the Victoria & Albert Museum until 1990, when returned to the care of the National Trust, to which ownership was transferred in 2002.