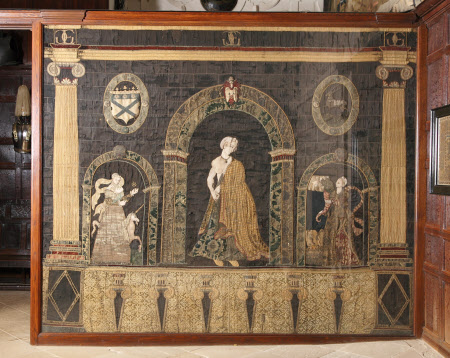 An embroidered appliqué wall hanging showing the central figure of Lucrecia standing in a large portal with personifications of her qualities of Chasteti (chastity) and Liberaliter (liberality) in smaller portals at each side. They stand within a larger classically inspired setting featuring a foreground of tapering pilasters, a fluted column with an ionic capital at each side and an entablature running along the top. It is one of a set of five hangings commissioned by Elizabeth, Countess of Shrewsbury (1527-1608), to furnish her home at Chatsworth in the 1670s following her fourth marriage to George Talbot, 6th Earl of Shrewsbury (1528-90). They are represented by an intertwined GES for George and Elizabeth Shrewsbury in the centre of the entablature and above the flanking columns. Above each of the smaller portals in an oval medallion decorated with two white and two blue heraldic roses and featuring a shield bearing the Hardwick arms surmounted by a coronet for Elizabeth Shrewsbury on the left and the Hardwick crest of a stag on the right. The set of five hangings was taken to Hardwick in the late 1580s and 1590s and used to furnish the recently completed New Hall built by the Countess between 1597 and 1601. They are recorded in the Withdrawing Chamber in the 1601 inventory. The hanging is constructed of high value brightly coloured silk fabrics including velvet, satin, tissue and lampas, cloth of silver and gold and is embellished with applied couched decoration of gold and silver filé and silk floss threads, braids and bobbin lace, cords, spangles and purl, all applied to a plain weave linen lining that covers the whole of the reverse.

This embroidered wall hanging of Lucretia, the loyal wife of the Roman general Lucius Tarquinius Collatinus, is one of the largest and most splendid embroideries surviving from the Elizabethan age. It is from a set of five showing historical and mythical female figures, which also includes Penelope, Zenobia, Arthemesia and Cleopatra (fragment). They were probably inspired by female characters in Geoffrey Chaucer’s The Legend of Good Women, published in his complete works in 1532 and were intended to show the virtues of their owner, Elizabeth, Countess of Shrewsbury. The group of Noble Women selected by the Countess are all defined by their relationship to their husbands as either wives or widows and in the same way, she constructs her own identity in her textiles though prominent use of the Earl of Shrewsbury’s arms and initials, conjoined with her own. Lucretia is shown holding a knife to her breast, poised to commit suicide rather than suffer the shame of her rape by Sextus, son of Lucius Tarquinius Superbus (d.495BC), the last king of Rome. Her death is believed to have contributed to the overthrow of the Roman monarchy and her husband went on to become one of the first of the two consuls of the Roman Republic. Lucretia is the only figure from the group of five Noble Women to have an obvious visual source, The Death of Lucretia (Musée des Beaux-Arts de Beaune) which is believed to have once belonged to Mary, Queen of Scots (1542-1587) (Wells-Cole 1997, p.258; Levey 2007, pp. 74-5). Although the Hardwick Lucretia is shown partially clothed, both the painting and the embroidery share their composition. Susan Frye has convincingly argued that the figure of Chastity flanking Lucretia is a portrait of Mary wearing deuil blanc, white mourning associated with French queens, after a portrait by François Clouet painted in 1559-60, while the unicorn at her side refers to both Chastity and the Scottish royal coat of arms (Frye 2010, pp. 68-69). Mary had been placed in the charge of the Earl of Shrewsbury in 1569 and throughout her captivity was a prolific embroiderer and in the early years Elizabeth, Countess of Shrewsbury was often her companion. The set of Noble Women hangings were completed c.1573 when Mary and the Countess were on good terms and the sophisticated use of personification and emblems may show Mary's influence (Levey 2007, pp.74-79; Slocombe 2016 pp.124-127). Luxurious textiles were a significant part of the furnishing of a sixteenth-century household, used for comfort, decoration and to indicate wealth and the Countess used fine textiles in the form of hangings, table carpets, bed sets and cushions to create a display of opulence and wealth in her homes. This hanging is made using appliqué, a technique where fabric is cut and layered together to create a design, here using the most expensive silk, velvet and cloth of gold, embellished with gold and silver thread. Many of the fabrics came from ecclesiastical vestments removed from churches in the mid-16th century following the changes to religious worship introduced during the English Reformation and, in this case, then recycled as domestic furnishings.