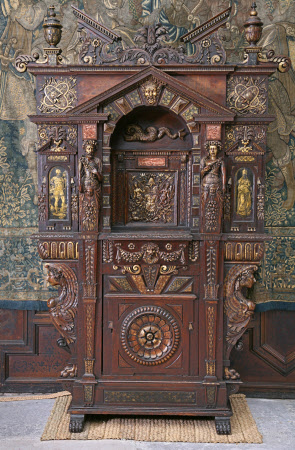 Carved and painted walnut and oak, parcel-gilt and marble-inlaid, on an oak carcase, with gilt and silver paintings on leather

A rare carved, painted, parcel-gilt and marble-inlaid oak and walnut cupboard, with gilt and silver grisailles on leather, probably Paris, circa 1570, incorporating motifs after designs of Jacques I Androuet du Cerceau (1510 - 1584), probably at Hardwick before 1601, but possibly previously at Chatsworth. Compressed wood shavings also used as decoration. Of architectural form, and topped by a broken pediment between urns on pedestals, all above a further pediment formed from a reticulated arch and a niche cupboard door, carved with military trophies and beneath an applied giltwood sea monster (possibly later or re-located), flanked to either side by a figural term, and two further bays filled with monochrome paintings of gilt and silver grisaille on leather of Mars and Minerva, each above a shelf (also later) supported on a profile term of a winged woman or harpy with a lion's paw foot, all flanking a drawer carved with a mask between drapes above a cupboard door carved with a large foliate roundel. Raised on probably later paw-carved sledge feet. Decorated in colours (much of which appears to be original) and with further decoration of inset marble plaques and faux marble painted areas. Elements of decoration, i.e. to either side of the pediment above the central niche, lacking. .

Usually identified with 'a Cubberd with tills Carved and guilt, a Carpet for it of needlework with gold fringe lined with Crimson taffety sarcenet' in the inventory of 1601, but this is doubtful, as the cabinet's drawers are not its most prominent feature, and it is too high to accommodate a decorative carpet. The harpy terms flanking the cabinet's base are clearly derived from a du Cerceau plate. Other similarities between this cabinet and the 'sea-dog' table [NT 1127744], such as the carving to the central drawer front, suggest that both may have come from the same source. Possibly Mary, Queen of Scots, in the charge of the Earl of Shrewsbury between 1568 and 1584, was involved in their acquisition. Virtually all of the motifs on the cabinet can be paralleled in prints by Du Cerceau. Dendochronological analysis published in January 2016 found that French oak (both slow and fast growing) which cannot have been felled before 1540 was used in the construction of this cabinet.