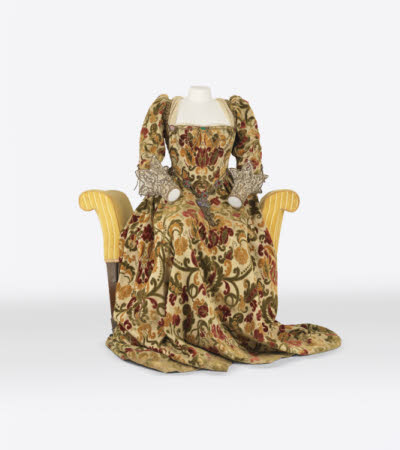 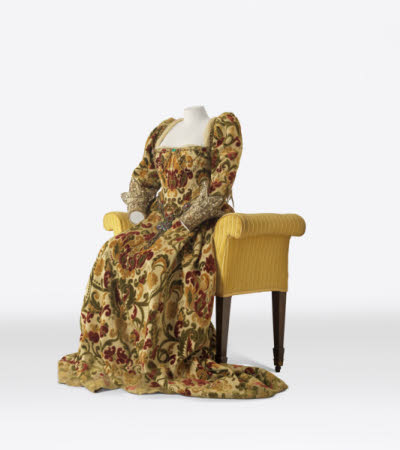 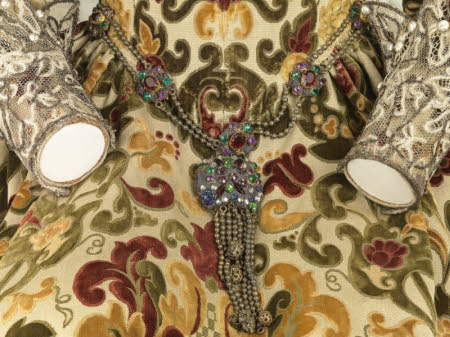 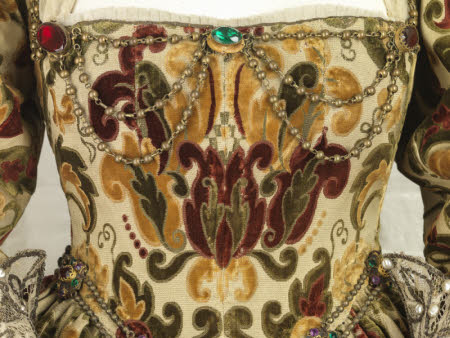 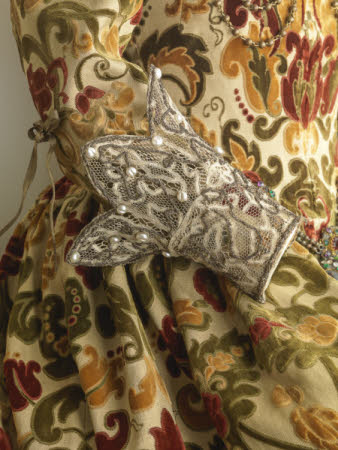 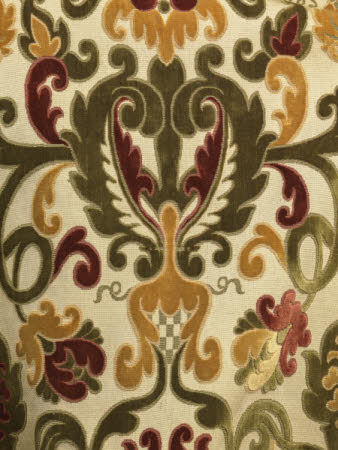 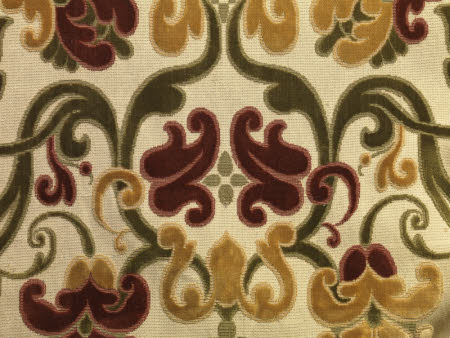 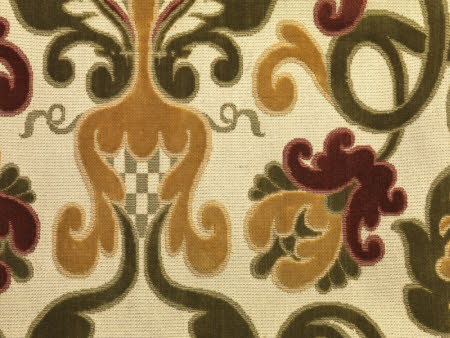 stamped velvet; the cuffs made of wire and embellished with metal thread and pearls

Costume worn by Ellen Terry (1847–1928) in the role of 'Beatrice' for the 1882 production of 'Much Ado About Nothing' at the Lyceum Theatre (also possibly worn for the 1903 Imperial Theatre revival). Made by Auguste et Cie, with costumier Patience Harris likely having overseen the design process. Genoese cut and uncut velvet brocade. Stylised floral design. Red, gold and green decorated with belt of gilt beads and pastes. Low square cut neck with assorted tulles.

Over 20 years, Ellen Terry (1847–1928) forged her reputation as a Shakespearian lead playing opposite Henry Irving (1838–1905), who staged 'Much Ado About Nothing' in 1882 precisely to showcase her talents. Indeed, all who witnessed her performance agreed that she was born for the role of Beatrice, a role of passion and sharp-tongued wit. The heroine’s line ‘there was a star danced, and under that I was born’ subsequently become associated with Terry for the rest of her life. Terry and Irving insisted on staging plays informed by the authenticity of Shakespeare’s original text rather than merely adhering to previous characterisations. Terry's Beatrice was therefore the ‘merry hearted, pleasant spirited lady’ rather than the scold of traditional interpretation, while Irving's Benedick was a gentleman rather than a bully. The same principle was applied to the staging and costume design. Working with theatre manager (and 'Dracula' author), Bram Stoker (1847-1912), Irving’s sets for the play were among the most lavish and meticulous ever produced. The most opulent staging was for the famous wedding scene of Claudio and Hero, where chaos ensues after Hero is accused of being unfaithful. Irving used an Italian picture of a cathedral for the backdrop and consulted a priest over the liturgical accuracy of the altar and lights. As the leading lady of the Lyceum Theatre Company, Terry’s performances took centre stage. The costumes she wore sought to enhance the beauty and drama of her characterisation and complement the spectacle of the staging. Terry owned many books on the history of fashion which – full of her notes on style, fabric and colour – were the inspiration for her and her costume makers, who applied historic styling to their designs. The intricately detailed costumes worn by Terry and Irving in 'Much Ado About Nothing' show the influence of Elizabethan fashion. Terry and Irving's costumes for the performance were produced by theatrical costumiers Auguste et Cie, based in the heart of London’s theatreland off The Strand. They supplied theatres across Britain and America and the costumier Patience Harris, whose mother founded the company in 1873, is likely to have overseen the design process. Heavily structured and made of thick velvet, the costumes would have been hot and restrictive to wear. But what they lacked in comfort was offset by their impact; the bold green and red foliate pattern of Beatrice’s dress (NT 1118835) was inspired by 16th-century Italian velvet designs and the beading on the front of Benedick’s doublet (NT 1118907) would have shimmered under the soft intensity of the theatre’s limelight. 'Much Ado About Nothing' opened on 11 October 1882 to enthusiastic reviews. The response and sentiment of the audience was captured in a review in the Daily Telegraph: ‘There was but one remark heard last night as an audience, with pleasure written on every countenance, filed out of the handsome theatre into the wet and miserable streets. All had gone more than well...and never before in the memory of the oldest playgoer, had "Much Ado About Nothing" been so well acted or so sumptuously attired.'