The Temple of the Arts Ring 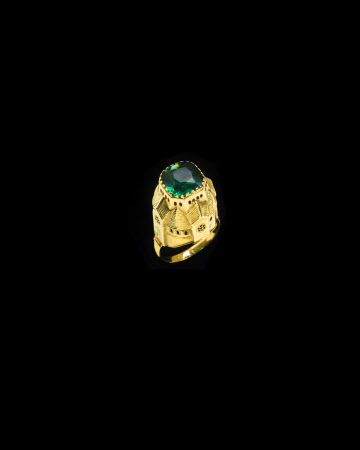 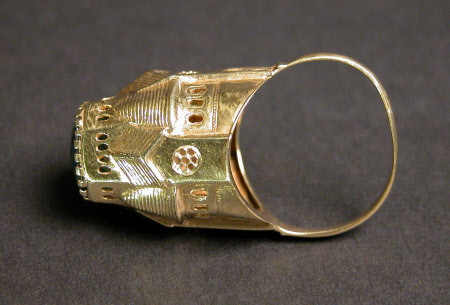 Henry Irving had this impressive ring made for Ellen Terry in 1905 by John Paul Cooper, an English Arts & Crafts goldsmith who was a friend of her son, Edward Gordon Craig. The “Castle on the Rock” ring represented the talented careers of both Terry and Irving, and was nicknamed the “Globe Ring” after the Globe Theatre by Ellen’s daughter Edith Craig.

The ‘Temple Of The Arts Ring’, circa 1905, of gold with green paste, formerly thought to be an emerald. Of architectural construction designed and made by John Paul Cooper (1869-1933). Engraved “18”. Lodged in a Georgian circular-shaped brown leather ring box.

In 1905 Ellen Terry commissioned John Paul Cooper, a talented Designer Craftsman, to make an appropriate gold setting for a valuable emerald which Henry Irving had given to her just before his death. A close friend of Ellen’s son Edward Gordon Craig, Cooper was a natural choice to carry out the work. Both men had known one another since they were pupils at Bradfield School in Berkshire and their friendship continued through the late 1880s and 1890s. Cooper went on to become a protegé of Henry Wilson (1864-1934), the celebrated architect turned goldsmith, silversmith and teacher, and it was through Wilson that he learned the necessary technical skills to become a highly accomplished jeweller working in the Arts and Crafts tradition. The ring itself is reminiscent of a medieval turreted building and, indeed, is often known as the ‘Castle On The Rock’ ring. Massive in form and fashioned ‘in the round’ it was, according to Ellen’s daughter Edith, inspired by London’s Globe Theatre. Its design is not unique; 17th and 18th Century Jewish marriage rings also conform to the shape of buildings, sometimes with doors and windows which open and close. An interesting fact concerning the ‘emerald’ came to light a number of years ago. On close examination it was found not to be a precious and costly gem but green paste - in other words a piece of faceted glass. Whether Henry Irving knew he was giving Ellen a worthless trinket is, of course, a matter of conjecture. In the best tradition of the theatrical world nothing is ever quite what it seems.Report by John Benjamin, Honorary Jewellery AdviserAugust 2021