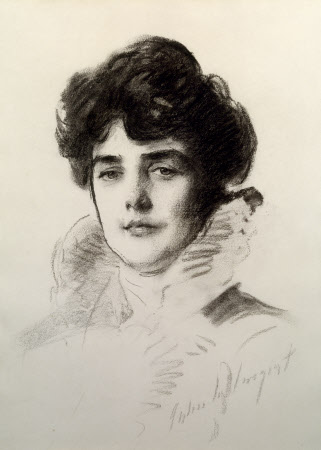 This charcoal drawing by John Singer Sargent is of Jennie Jerome, and can be found in the study at Chartwell. Jennie Jerome was Sir Winston Churchill’s mother, and was born in Brooklyn, New York in 1854, the daughter of Leonard and Clarissa Jerome. Leonard Jerome was the owner and editor of the New York Times. Churchill was extremely proud of his half American heritage and in his address to a joint session of the United States Congress on 26 December 1941, he joked to the assembled Senators and Representatives that, “If my father had been American and my mother British, instead of the other way round, I might have got here on my own!” She was part of the so-called American buccaneers, heiresses from America who came to Europe in search of aristocratic husbands. Jennie Jerome first met Churchill’s father, Lord Randolph Churchill in 1873 during a trip to Cowes on the Isle of Wight, and the pair went on to marry at the British Embassy in Paris on 15 April 1874. It is often claimed that Churchill did not receive much interest or even love from his parents and indeed the closest person to Churchill in his early life was his nanny, Mrs. Everest, however this did not stop Churchill loving his parents. In fact Churchill noted that, “My mother … always seemed to me a fairy princess: a radiant being possessed of limitless riches and power. She shone for me like the Evening Star.” Around the time of the Boer War, she was heavily involved in looking after British soldiers abroad and chartered a hospital ship to look after the sick and wounded. Later in life she became involved in writing and published 'Reminiscences of Lady Randolph Churchill' in 1908, the cover of which was the Singer Sargent portrait. Further, she became involved in the London theatre scene and had moderate success form authoring a number of plays. Following the death of Churchill’s father, Lord Randolph Churchill in 1895 Jennie Jerome went on to marry twice more. First she married George Cornwallis West in 1900, although divorced him in 1914, before going on to marry Montagu Porch in 1918. Renowned for her beauty and ebullience as well as her own love for life and excitement, she was known to have affairs with several prominent men of the day including the Prince of Wales, later Edward VII. She died in London on 29 June 1921 as a result of a fall when she was 67.

Given with Chartwell in 1946