Workshop of Kishan Chand and House of Worth 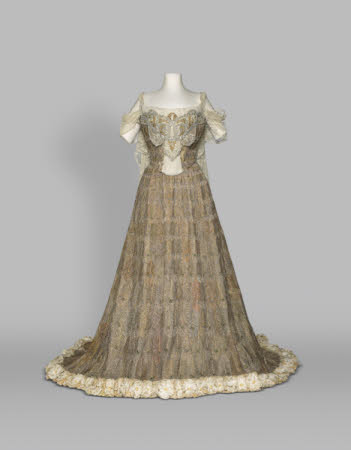 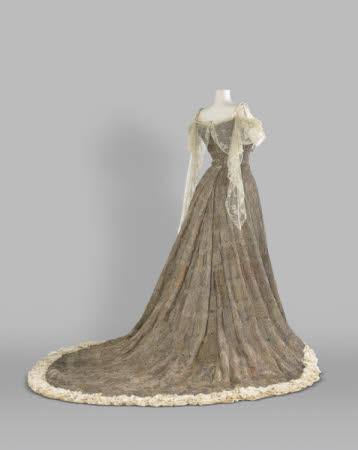 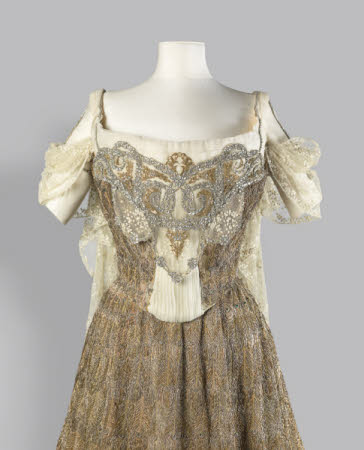 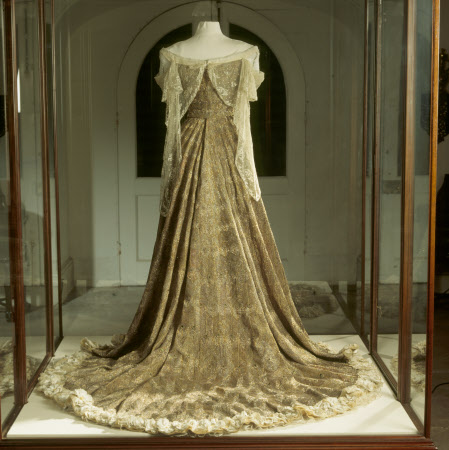 This dress tells us a story of our colonial past. It was worn by Mary Curzon (1870–1906), the wife of George Curzon, the Viceroy of India (1859–1925), at a ball in Delhi on 6 January 1903 to mark the coronation of King Edward VII (1841–1910) as Emperor of India. The spectacular and lavish event was full of pageantry and royal ceremony, and was designed to entertain and impress Indian princes and dignitaries, while underlining the power of British rule. The design of Mary’s dress was not only highly fashionable but also subtly political. Made of fabric traditionally worn by Mughal court rulers, it appropriated the motif of a peacock feather (an important Hindu symbol, particularly associated with Lord Krishna and the goddess Saraswati). The intention was perhaps to present a visual sense of continuity, aligning British rule with Indian courts of the past as a statement of dominance. The richly decorated fabric, which includes hundreds of beetle-wing cases, was made by Indian craftsmen, while the dress itself was made in Paris by Jean-Philippe Worth (1856–1926).

Gold and silver Zardozi embroidery with applied green beetle wing covers (elytra) on silk taffeta with a lining of Indian cotton muslin. The Peacock Dress embroidery was made at the workshop of Kishan Chand in India before being sent to French haute couture designers ‘House of Worth’ in Paris to be made into a fashionable European gown, c.1900–1902. It was worn by Mary Victoria Leiter, Lady Curzon (1870-1906), Vicereine of India, at the Delhi Durbar in 1903.

Lady Mary Curzon became Vicereine of India upon on her husband’s appointment as Viceroy in 1898. She recorded her experience of India in diaries and countless letters, a life revolving around a calendar of social events staged to symbolise the authority of the British Empire. Despite frequent ill-health, Lady Curzon was the public face of the Viceroyalty and her life was scrutinised and reported on by the press. She had a keen interest in fashion and was aware of the importance of her appearance as the wife of a political figure. Known for her preference of combining Indian textiles with European fashion styles, Lady Curzon wore this gown, known as Peacock Dress, at the 1903 Delhi Durbar Coronation Ball. The Ball was the pinnacle of two weeks of events marking the succession of Edward VII and Queen Alexandra as Emperor and Empress of India. It was held in the Diwan-I-Khas at the Red Fort, Delhi, the historic residence of the Mughal Emperors. Lady Curzon’s dress deliberately referred to – or, as the historian Nicola J. Thomas writes, ‘replaced’ – the Peacock Throne which had originally stood in the Diwan-I-Khas (Thomas 2007, p. 392). This dazzling jewelled throne, now lost, was made for Shah Jahan in the early 17th century but was looted during the Persian invasion of Nader Shah in 1739. A replica throne was destroyed in 1857 when the British commandeered the Red Fort as a garrison in India’s First War of Independence. The gown was made of Zardozi embroidered fabric traditionally used for elaborate Mughal court garments and palace furnishings. The technique takes its name from the densely worked metal thread; zar (gold) and dozi (work). It used the peacock image for its pattern, a symbol of great significance in Indian culture and the Hindu religion. The use of this motif would have been noted by all who saw it. The fabric was embroidered at the workshop of Kishan Chand in India and is likely to have been sourced by Lady Mary herself before being shipped to Paris to be made into a dress by the House of Worth (Thomas, 2007). Mary was unusual in her choice to wear Indian textiles, and to have many of her clothes made up in India. This would not have gone unnoticed in the higher echelons of Indian society, among Maharajas and Maharanis at state functions. Other gowns worn by Lady Curzon in India are in the collection of the Fashion Museum, Bath.

Commissioned by Lady Mary Curzon and by descent to her daughter Lady Alexandra Metcalfe; offered and accepted in lieu of inheritance tax by HM Government and generously allocated to Kedleston for display in 1997.

Workshop of Kishan Chand and House of Worth, embroiderer and designer Jean Philippe Worth, designer