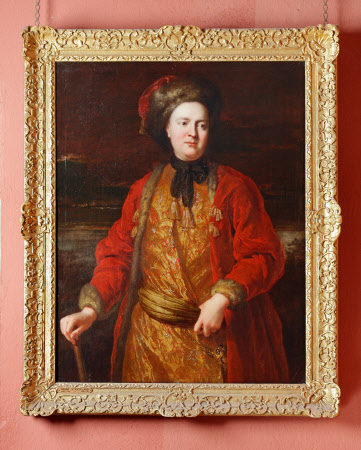 Oil painting on canvas, Roger Strickland (1680–1704) by Alexis-Simon Belle (Paris 1674 – Paris 1734), circa 1703. A three-quarter-length portrait, the sitter in Polish dress, embroidered jacket, scarlet coat, turban, 3rd. son of Thomas Strickland and Winifred Trentham. He took part in a French delegation to Poland returning 1699. Roger was the fourth (but third surviving) son of Sir Thomas Strickland, who took him into exile at Saint-Germain. His exotic costume is Polish, betokening his appointment as page to the prince de Conti, who was the French candidate for election to be King of Poland in 1697. He subsequently became page to Queen Mary of Modena, but died of smallpox at Toulon when serving with the French army against the English and Imperial forces in 1704. This is the one of the interesting group of portraits at Sizergh by Belle, who around 1700 became the accredited painter of the exiled Stuarts.