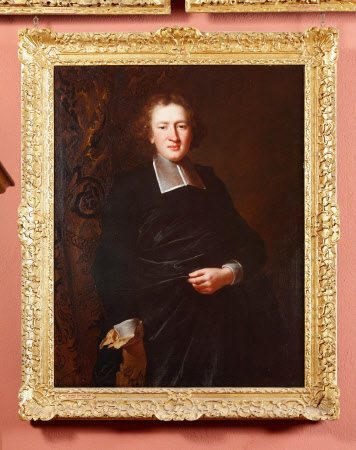 Oil painting on canvas, The Abbé/Reverend Thomas Strickland Bishop of Namur (c.1682–1740) by Alexis-Simon Belle (Paris 1674 – Paris 1734), circa 1703. A three-quarter-length portrait, almost facing, in clerical dress; his left hand on his hip, his gloved right hand at his side. later Bishop of Namur, 4th son of Thomas Strickland. Thomas was the fifth (but fourth surviving) son of Sir Thomas and Winifred, Lady Strickland, by whom he was brought up at the exiled Stuart court of Saint-Germain. This picture was painted around 1703, when he transferred from the English College at Douai to the Seminary of Saint-Grégoire in Paris. According to Lord Hervey, who was a political opponent, he passed ‘his whole life in gluttony, drunkenness, and the most infamous debauchery’. He also rendered himself odious to the Jacobites by arguing for the acceptance of the Hanoverians. But he did much for his see of Namur, of which the Emperor made him Bishop in 1727, for working in his cause.