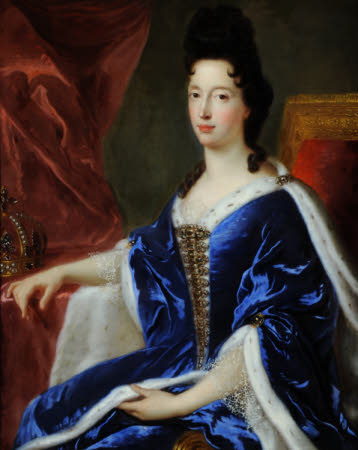 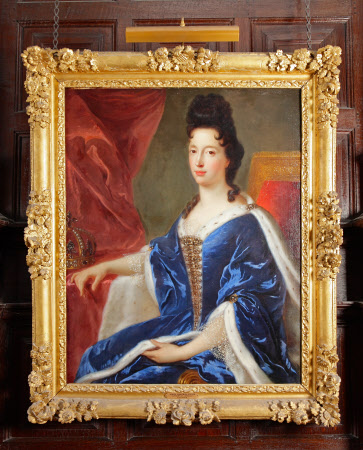 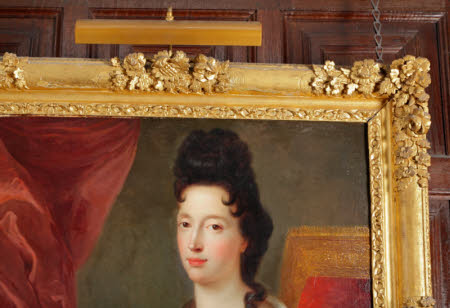 Winifred, Lady Strickland, bravely accompanied Mary of Modena and her son, the baby Prince James, on their perilous boat trip into exile in December 1688. Winifred's continuing loyalty to the exiled queen and to the Catholic faith was later rewarded with a post as Governess to the young prince.

Oil painting on canvas, Queen (Mary Beatrice d'Este) of Modena (1658 - 1718), attributed to Alexis-Simon Belle (Paris 1674 – Paris 1734), after François de Troy (Toulouse 1645 - Paris 1730). A half-length portrait In blue velvet robe with white fur trim; wearing Coronation Robes. Like almost all the French portraits at Sizergh, this one was previously ascribed to Hyacinthe Rigaud (1659–1743), which cannot be right, both on account of its style, and because he never painted the exiled Stuarts. Who did paint it is much harder to determine. The image has clearly been reduced from a three-quarter-length, apparently to make it a pair to the James II. This could suggest that it is the portrait of herself by de Troy that is known to have been owned by the exiled Queen. But the handling seems cruder than de Troy’s, whilst the French frame of ariound 1700 appears to be original to the picture. This may therefore be an adapted copy by the exiled Stuarts’ painter, Alexis-Simon Belle, of a lost original by de Troy.

Traditionally said to have been given by the Queen to Winifred Trentham, Lady Strickland but more probably given to her as a perquisite by the Old Pretender after the Queen's death; thence by descent, Christie's 18th July 1896 lot 15 (bought in);given by Henry Hornyold Strickland (1890 – 1975) with Sizergh Castle and its estates in 1950