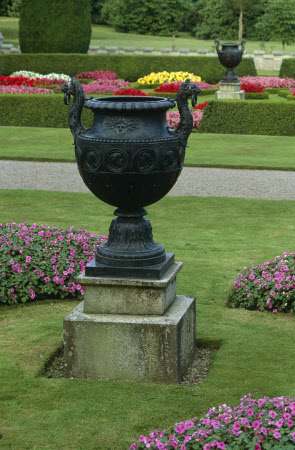 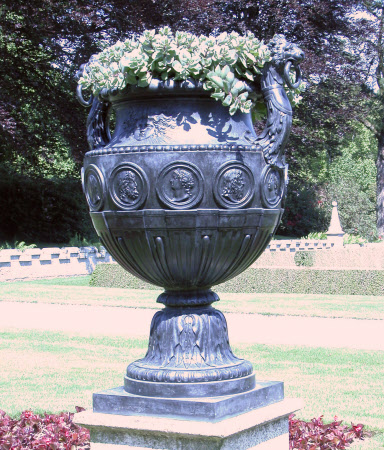 Who doesn’t like an eye-catching pot or two in their garden? But what about five pairs of magnificent bronze urns, modelled by Claude Ballin, goldsmith to Louis XIV at Versailles? Now that’s showing off on a scale similar to the Sun King himself. Gerald Agar-Robartes, 7th Viscount Clifden did just that when he purchased these urns at auction around 1925 to grace the formal gardens at Lanhydrock. They were probably made for the gardens at the Château de Bagatelle near Paris. Taking its name from the Italian ‘bagattella’, meaning a mere trifle or plaything, the Château was Marie Antoinette’s ‘maison de plaisance’, built for her in the 1770s by her brother-in-law, the Comte d'Artois. Bagatelle was confiscated during the French Revolution, escaped demolition and in 1835 was purchased by Richard Seymour-Conway, the 4th Marquis of Hertford (1800-71), one of the wealthiest men in Europe and a great connoisseur of art. Born in London but brought up in Paris, Hertford’s collection included masterpieces by Poussin, Van Dyck, Velásquez and Rubens among others. These now reside in the Wallace Collection in London, named after Hertford’s illegitimate son, Sir Richard Wallace, an art collector himself, who bequeathed them to the nation. Hertford was renowned for having copies made of significant parts of his collection and with the permission of Napoleon III, he took casts of the original 17th-century urns, possibly also taking the opportunity to make copies of others at Versailles. Forty six urns were recorded in the gardens of the Chateau de Bagatelle in 1870. Hertford’s copies have made their way into other notable National Trust gardens, including Anglesey Abbey and Sissinghurst. Vita Sackville West would have first seen these urns when she visited Bagatelle with her mother as a young child.

One of a pair of large 18th-century bronze garden urns with semi-gadrooned irons above sunburst female masks, flanked by lion mask and ring handles on acanthus supports, the lower body with twelve portrait medallions of classical subjects, on bell-shaped acanthus supports and square bases. On stone plinth.

A gift from the Hon. Gerald Agar-Robartes, later 7th Viscount Clifden,1883-1966, who gave Lanhydrock to the National Trust in 1953 and continued to live there with his two sisters, Everilda and Violet, until his death in 1966. The urns once formed part of Lord Hertford's collection at the Chateau de Bagatelle in the Bois de Boulogne, west of Paris. They were modelled in the late 17th century by Louis Ballin, goldsmith to Louis XIV. Bagatelle was built for Marie Antoinette in the 1770s by her brother-in-law, the Comte d'Artois, later King Charles X, and it is possible that the urns were placed there then. Lord Hertford, who occupied Bagatelle in the mid-19th century, bequeathed the urns to Sir Richard Wallace. Wallace, in his turn, left them to his secretary, Sir John Murray Scott, who removed them to Nether Swell, Gloucestershire. They were bought from his sister by the 7th Viscount Clifden who brought them to Lanhydrock.