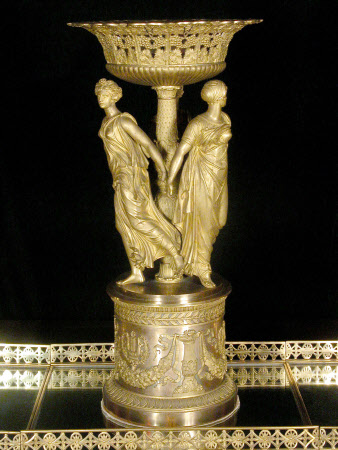 This impressive piece adorns the centre of the Dining Room table and reflects the status of William, 3rd Lord Berwick as Ambassador to the Court of Naples. The candle light would have glistened off the metalwork and reflected up from the mirrored base.

Large French ormolu centrepiece with female figures supporting a fluted bowl, pierced with a border of grapes and vine leaves. Cylindrical plinth decorated with applied lyres, columns and floral swags. Manufactured by Pierre-Philippe Thomire circa 1810. Pierre-Philippe Thomire was the outstanding Empire 'Fondeur-Doreur'. A goldsmith and metalworker employed by both Louis XVI and Napoleon. He collaborated frequently with Weisweiler, making bronze mounts for his furniture, notably that for Caroline Murat, between 1809-11 (Palazzo Reale, Naples).

Believed to be 3rd Lord Berwick collection: William Noel-Hill, 3rd Baron Berwick (1773-1842). By descent bequeathed to the National Trust with the estate, house and contents of Attingham by Thomas Henry Noel-Hill, 8th Baron Berwick (1877-1947) on 15th May 1953.