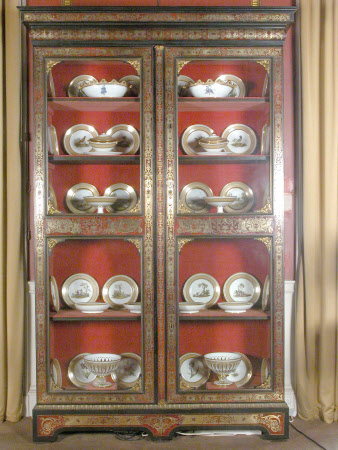 Attingham’s exquisite Boulle cabinet was made in France in around 1820. It is chiefly made from ebonised pearwood, turtleshell, brass inlay and ormolu. The red tortoiseshell ground is overlaid with elaborate brass grotesques, birds and foxes amidst foliated strapwork. The cabinet encloses four shelves and is topped by a moulded cornice above a pair of doors with brass spandrels. The doors are fitted with two panes of glass which were probably added later. The cabinet has foliate-cast surbase ormolu moulding and is raised on a cutaway bracket plinth. The cabinet was probably introduced to Attingham by William, 3rd Lord Berwick, as records show that a 'large Boule Armoire' was purchased in 1833 for £70. In a 1913 inventory of Attingham the Boulle cabinet was listed in the Drawing Room. André Charles Boulle (1642-1732) was appointed royal cabinetmaker to Louis XIV of France, known as the ‘Sun King,’ in 1672. He designed and made much of the furniture for the royal palaces, especially Versailles. His outstanding ability to inlay furniture with pictorial marquetry in wood, and later elaborate tortoiseshell and brass inlays, ensured that his name became attached to inlaid furniture popular during the eighteenth and nineteenth centuries.

Probably 3rd Lord Berwick collection: William Noel-Hill, 3rd Baron Berwick (1773 - 1842) and the 'large Boule Armoire' purchased in 1833 for £70. Listed in the Inventory taken at Attingham Park in 1913 in the Drawing Room (p. 78). Thence, by descent and bequeathed to the National Trust with the estate, house and partial contents of Attingham by Thomas Henry Noel-Hill, 8th Baron Berwick (1877-1947) and transferred to the National Trust on 15th May 1953.