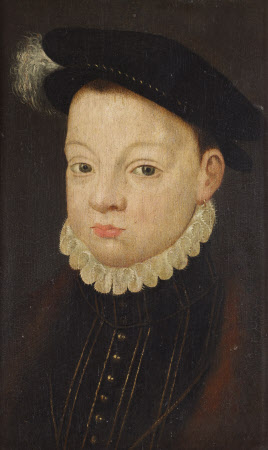 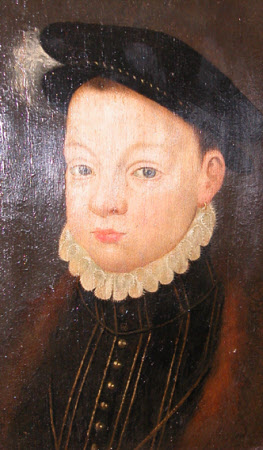 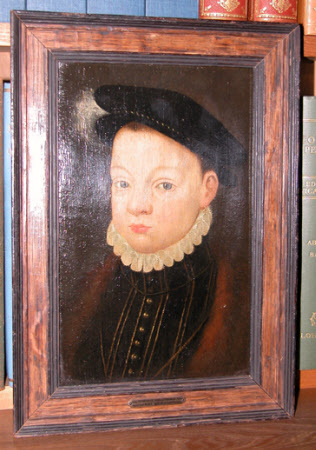 Oil painting on panel, Called King François II, King of France (1544–1560) as a Young Boy, French School, late 16th century. Portrait of a young boy, head and shoulders turned slightly to left, gazing at spectator, wearing a black feathered cap, small ruff, black doublet embroidered with gilt stripes and with gilt buttons and brown fur collar. He was the eldest son of Henri II (1519-1559) and Catherine de’Medici (1519-1589), born at Fontainebleau in Jan 1544. In April 1558 he married Mary Stuart (1542-1587), Queen of Scots, daughter of James V of Scotland (1512-1542) and Mary of Guise (1515-1560). He ascended the French throne in July 1559. During his short reign, the young sickly king was a mere tool of his uncles: Francis, Duc de Guise (1519-1563) and Charles, Cardinal of Lorraine (1525-1574) , into whose hands he virtually delivered reigns of government. Favouritism and high-handedness awakened resentment of princes of blood; Antoine de Bourbon, King of Navarre and Louis de Condé his younger brother, gave their countenance to conspiracy with protestants against the house of Guise. However plot was discovered and most of conspirators were killed. Duc de Guise was named lieutenant general of the kingdom; Michel de l’Hôpital was Chancellor; through his mediation Edict of Romorantin passed, which provided that all cases of heresy should be decided by bishops in opposition to a proposal to introduce the Inquisition. In November 1560, Francis became desperately ill. The doctors discovered a fistula in his left ear, the sepsis spread to the king’s brain and on the 5 December 1650, at the age of sixteen, he died in great suffering exacerbated by the vile remedies administered to him by his doctors.