A pair of urns with satyr mascarons and harpies 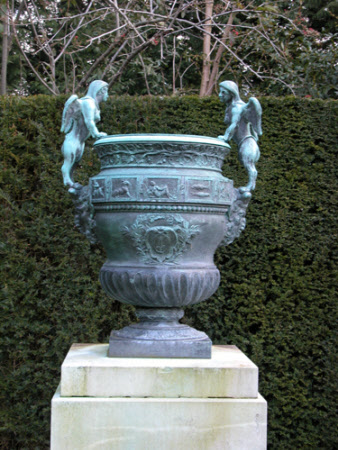 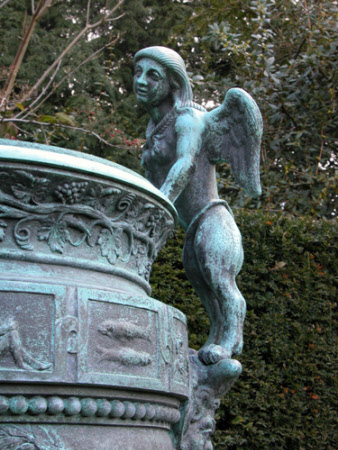 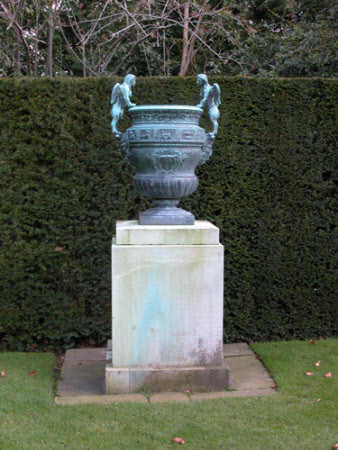 Bronze, a pair of urns with satyr mascarons and harpies, French School after a design by Claude Ballin I (Paris 1615 - Paris 1678), modelled by Michel Anguier (Eu 1612 - Paris 1686), Nicolas Legendre (Etampes-sur-Marne 1619 - Paris 1671), Laurent Magnier (Paris 1615 - Paris 1700) and Jean-Baptiste Tuby (1635-1700), c. 1864-72. A pair of urns cast in bronze in the mid-19th century for the Marquess of Hertford at Bagatelle; cast after the original pair at the Château de Versailles (MR 3420-21). The bodies ornamented in low relief with a band of vine below the aperture, strapwork containing the twelve signs of the zodiac, and laurel wreathes framing cartouches which encase swords; the bowls of the urns fluted and mounted on turned stems ornamented with acanthus and tongue. Each vase with twin mascarons at left and right in the form of satyrs’ heads supporting two winged harpies on the rim of the aperture. Mounted on integral bronze bases and stone plinths.

One of three pairs of ‘Bagatelle’ urns cast in the 19th century after original 17th century urns at the Château de Versailles (NT 515129, 515165-6), the group representing three of a total of thirteen different types of paired urns placed on the Parterre de Midi and Parterre du Nord. The Anglesey Abbey urns can be referred to as ‘sphinx’, ‘harpy’, and ‘spiral-fluting’ types, whilst other types in the group incorporate dragons, sirens, cupids, Janus heads, and other motifs (see Davis 1991, p. 134 for a full list with plates). The original bronze urns were produced for the ‘Roi Soleil’, Louis XIV (1638-1715), who famously identified himself with the sun god, Apollo. Apolline iconography – the sun, zodiac, and laurel leaf – is present in both NT 515165 and 515166 and in other urn types within the set, while motifs like the all-seeing Eye of Providence symbolise the omnipotence of the King. All but two of the thirteen urns were designed by the royal goldsmith Claude Ballin I (Paris 1615 - Paris 1678); see Château de Versailles, inv.grav 6429 for the design of the harpy type engraved by Jean Le Pautre after Claude Ballin (1673). The wax models from Ballin’s designs were executed by the court sculptors Michel Anguier, Nicolas Legendre, Laurent Magnier and Jean-Baptiste Tuby, and they were all cast by the bronze founder Ambroise Duval, according to a contract signed between Duval and Colbert in December 1665. The three pairs of copies at Anglesey Abbey – in addition to the five pairs at Lanhydrock (NT 880855-59) and the pairs at Sissinghurst (NT 802361) – were made for the Château de Bagatelle, a mansion inherited by the great art collector and patron Richard Seymour-Conway, 4th Marquess of Hertford (1800-70), in 1842. Situated on the outskirts of the Bois de Boulogne, Bagatelle had been the pleasure palace of the Comte d’Artois (1757-1836), later Charles X of France, and had been given to the 3rd Marquess, Francis Seymour-Conway, in 1835 by the last Bourbon heir and pretender monarch, Henri, Comte de Chambord (1820-83). The 4th Marquess was supposed to have acquired Bagatelle with a complete set of bronze urns, of different designs, that had originally been made for Versailles. The French Revolution having supervened between the creation of Bagatelle by the Comte d’Artois and its acquisition by the Marquess of Hertford – Napoleon I’s son, the Roi de Rome, had lived at Bagatelle in these intervening years – it is very unlikely that any such urns would have survived in situ. Permission to cast replacements for Bagatelle, which is believed to have happened in around 1864, was granted by none other than Napoleon III, a friend of the Marquess, who had himself cast new urns from the Versailles originals upon being crowned Emperor in 1852. These casts were made by the foundry Christophe-François Calla (1802-84) and remain in situ at Versailles, mounted alongside the originals (see Château de Versailles, inv.nos 2009.00.096, 2009.00.107, 2009.00.101, 2009.00.102, and 2009.00.099, 2009.00.105). None of the Hertford urns bears a founder’s mark, making a definitive attribution impossible. This is further complicated by the fact that more casts appear to have been ordered by Sir Richard Wallace (1818-90), the Marquess’s son, as there are today more urns than the 46 recorded in the 1871 inventory of Bagatelle, drawn up a year after the Marquess’s death. The Hertford/Wallace urns may have been cast by Calla, the same foundry that Napoleon III engaged, or by other leading bronze foundries such as Barbedienne or Barbezat. A likely contender for the Wallace casts is the maitre de forge Antoine Durenne, whose 1877 trade catalogue includes photographs of several high-quality casts of the Ballin urns. Another is the dealer and bronzier Alfred Beurdeley, who, in around 1872, was named as the keeper of various models of the Ballin urns in a letter by Wallace to Mervyn Wingfield, 7th Viscount Powerscourt (1836–1904), who sought casts for his own garden in Ireland (Viscount Powerscourt, A description and history of Powerscourt, London 1903, p.86). Beurdeley supplied these casts but may not have actually made them; it is likely that the actual casting was done with a fine art founder, such as Durenne. The Hertford/Wallace urns were still in situ at Bagatelle until around 1900 when many were brought to England by Sir Richard’s secretary and Lady Wallace’s advisor and residuary legatee, Sir John Murray Scott (1847-1912). Scott, who became one of the first Trustees of the Wallace Collection, died in 1912, leaving all his free property – including everything in France – to his lover Victoria Sackville-West, Baroness Sackville (1862–1936). Of the urns Scott brought back to England, some remained at Hertford House (The Wallace Collection) and some were installed at his Gloucestershire home, Netherswell Manor (of these, five pairs were purchased indirectly by Viscount Clifden of Lanhydrock) and of the urns bequeathed to Baroness Sackville, three pairs passed into the collection at Anglesey Abbey, whilst others remain at Sissinghurst (National Trust and private collection). The three Anglesey Abbey pairs were purchased by Lord Fairhaven from the auction house Spink & Son on 24 April 1947. The receipt provides the following provenance statement: ‘Acquired by Sir Richard Wallace for Bagatelle. Bequeathed by Lady Wallace to Sir John Murray Scott, and bequeathed by him to the late Lady Sackville. Purchased at Lady Sackville’s Sale, 40, Sussex Place, Brighton, on 25th June, 1923, lots 561, 563, 564 (190 guineas each pair) by Sir James Caird, Bart., on whose behalf they are now being sold, and removed from his house, Ackroydon, Wimbledon.’ Sir James Caird, Baronet of Glenfarquhar (1864-1954) was a Scottish shipping magnate and principal benefactor of the National Maritime Museum. Alice Rylance-Watson 2020