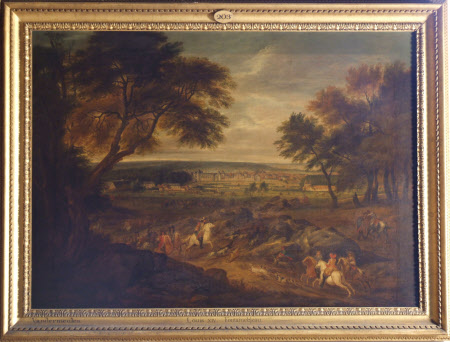 The artist was a Flemish Baroque painter who became well-known for his battle scenes. The 3rd Earl considered these pictures of an earlier French adversary appropriate for his shrine to Napoleon and they have hung in the Beauty Room since at least 1835.

Oil painting on canvas, King Louis XIV, King of France (1638–1715) staghunting at Fountainebleau by Adam Frans van der Meulen (Brussels 1632 – Paris 1690), signed and dated: A.F.V. MEULEN. FEC: 1684 Louis XIV stag-hunting at Fountainebleau. The palace is in the centre, mid-distance; horsemen and hounds are coming from the left and right, closing on the stag, centre. Beyond, at left centre, is a crowd of horsemen and coaches.

Bought by the 2nd Earl of Egremont (1710-1763) at Mr Bristow's Auction in February 1759 for £15.15. Thence by descent, until the death in 1952 of the 3rd Lord Leconfield, who had given Petworth to the National Trust in 1947, and whose nephew and heir, John Wyndham, 6th Lord Leconfield and 1st Lord Egremont (1920-72) arranged for the acceptance of the major portion of the collections at Petworth in lieu of death duties (the first ever such arrangement) in 1956 by H.M.Treasury.