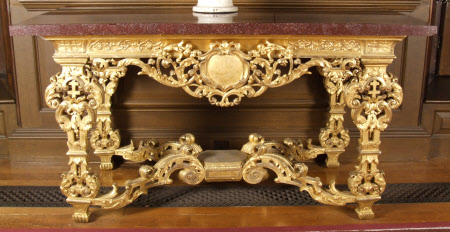 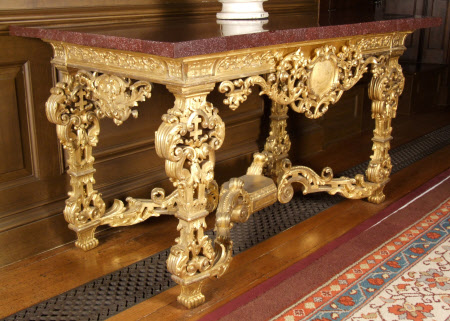 A French giltwood side-table or console table, circa 1700, the later porphyry top above an apron centred by a cartouche which would have borne a crest, on four baluster-shaped legs, elaborately pierced and carved incorporating the cross of Lorraine, joined by a cross-stretcher. This console can be compared to the console from Château de Bercy (Musée du Louvre - OA 5049) which is emblematic of the passage from Louis XIV style to the Régence style, its design being dated in the period 1690-1710. The legs, stretcher and cartouche of the present console table can also be paralleled with examples designed Pierre Le Pautre in his "Livre de tables, qui sont dans les apartemens du Roy [in Versailles] sur lesquelles sont posés les bijoux du Cabinet des Médailles" published circa 1690. The cross of Lorraine suggests that this table might have been commissioned by the duc Léopold I de Lorraine et de Bar (1679-1697) for his "Versailles lorrain", le château de Lunéville, where the décor of his bedroom designed by Germain Boffrand (1667-1754) incorporated the cross of Lorraine. This table is first recorded at Petworth in a painting of the carved room by C.R Leslie dated circa 1828 (Tate Britain). It is not listed in the House inventories after the death of the 2nd Earl of Egremont in 1763 so it must have been acquired by George Wyndham, 3rd Earl of Egremont (1751-1837).

Probably acquired by the 3rd Earl of Egremont before 1828 when the table appears in the carved room on a painting by C.R Leslie. By descent, until the death in 1952 of the 3rd Lord Leconfield, who had given Petworth to the National Trust in 1947, and whose nephew and heir, John Wyndham, 6th Lord Leconfield and 1st Lord Egremont (1920-72) arranged for the acceptance of the major portion of the collections at Petworth in lieu of death duties (the first ever such arrangement) in 1956 by H.M.Treasury.