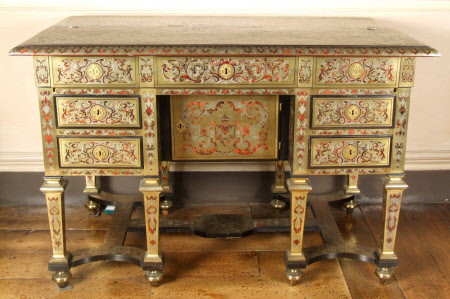 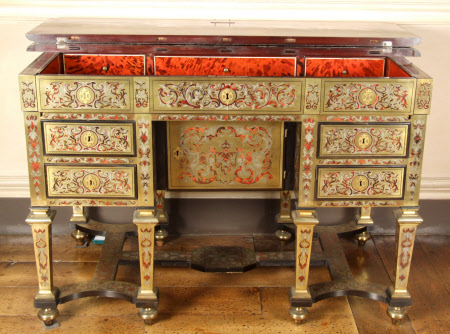 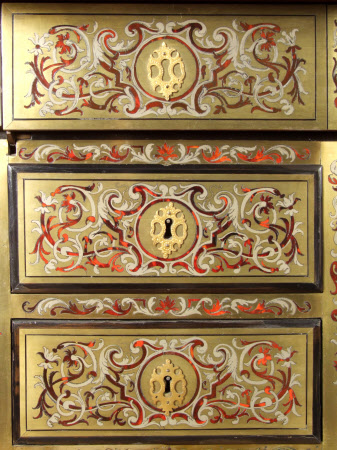 A kneehole desk or "bureau brisé",possibly French or English, circa 1680, veneered with marquetry of pewter and red tortoiseshell on brass inlaid with foliate arabesques, the interior with tortoiseshell and ivory. the rectangular hinged top opens and the front frieze falls to reveal a writing interior with geometric parquetry fitted with three small drawers, above a central cupboard door flanked to each side by a pair of drawers, on eight tapering legs joined by a shaped stretcher and later brass feet. This bureau is traditionally considered of French manufacture and has been paralleled with comparable desks by Pierre Gole (fl.1656-1684) but could also be related to examples by the London maker Gerrit Jensen (active 1680-1715). It is stamped by a later cabinet maker: Charles-Michel Cochois (fl.1737-1764). Cochois was a marchand-ébéniste and as a dealer is likely to have repaired the desk prior to sell it. The gilt-bronze mount at the top of the front left-hand leg bears the crown "C" mark showing that the desk was on the Paris market between 1745-1749 when the tax indicated by that mark was in force. It was most probably acquired by the 2nd Earl of Egremont (1710-1763) in the 1750s as listed for the first time in the 1763 Petworth House inventory with another writing desk with red tortoiseshell and pewter inlay on brass (NT 485368):" Rich brass and tortoiseshell inlaid commode" and "brass enlaid commode-table", both placed in bedrooms. In 1852 the 2nd Earl bought a "French commode" at Prestage's auction rooms. Two labels have been applied under the top, both inscribed "Henry J.Hatfield, General fine art manufacturer and renovator of old work, 86 Charlotte street, Fitzroy Square, W.". They are most probably related to restoration work. Indeed, there are traces of late restorations to the legs, feet and stretchers and the central door is likely to be a replacement.

Purchased by the 2nd Earl of Egremont (1710-1763) in the 1750s. Recorded in the 1763 Petworth House inventory. By descent, until the death in 1952 of the 3rd Lord Leconfield, who had given Petworth to the National Trust in 1947, and whose nephew and heir, John Wyndham, 6th Lord Leconfield and 1st Lord Egremont (1920-72) arranged for the acceptance of the major portion of the collections at Petworth in lieu of death duties (the first ever such arrangement) in 1956 by H.M.Treasury.