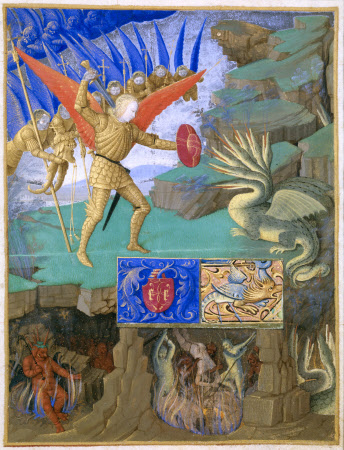 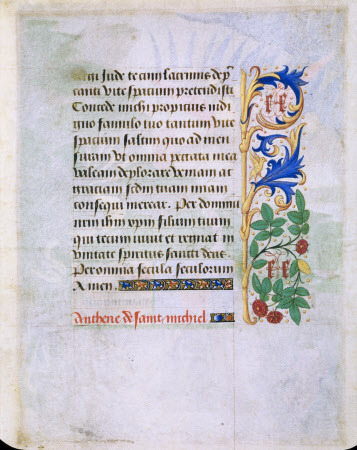 Gouache illustration on vellum, St. Michael Slaying the Dragon, Jean Fouquet c.1420-1481. The composition, as with the other miniatures in the series, is divided into two parts. In the upper half St Michael, wearing gilded armour with a cuirass in the form of a cockleshell, holds in his left hand a round shield and in his right a sword which he raises to strike the seven-headed dragon before him; to the left, behind, a double row of angels, those in the lower stage carrying crosses and the foremost holding the saint's helmet; to the right, rocks, where the single head of a second dragon can be seen. Part of the sky has become obscured as a result of oxidation. The lower part of the composition shows scenes in Hell, which are revealed by severing the ground at the feet of St. Michael. Left, the Devil is enthroned in a cavern from which smoke ascends through a fissure in the earth; centre, demons torturing souls of the damned in the flames; and right, the dragon which has been precipitated into the flames. In the centre of the composition is the device of Etienne Chevalier with the letter 'M' denoting the antiphon of St. Michael. As in the case of the other miniatures (cf. Martin, op. cit., P.12) P.184 has been disfigured by the application of a fragment of border illumination of a later date which conceals the opening words of the antiphon; Michael Archangele, veni in adjutorium populi. The scene described above is on the verso of the sheet. On the recto are sixteen lines of the text of the end of a prayer in Latin referring to the illness of King Hezekiah (Isaiah xxxviii; text transcribed by Durrieu, P.32) and border illuminations of rose sprigs, birds and blue and gold leaf decoration, together with Etienne Chevalier's cipher. Beneath is the rubric announcing the exercise of devotion; Anthene de Saint Michel.