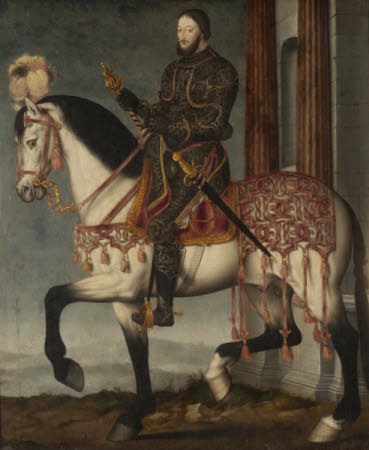 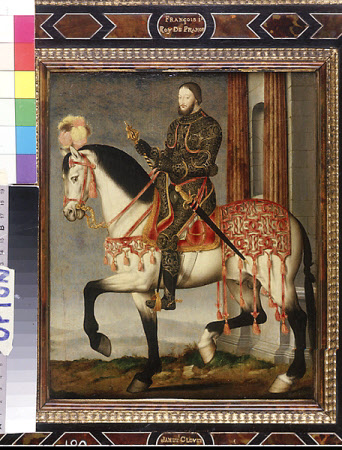 François 1er succeeded his cousin, Louis XII, whose daughter he had married, in 1515. He appointed Clouet court painter in 1541 on the death of the artist’s father Jean, whose name appeared in the royal accounts from 1515 onwards. This is a version of the picture in the Uffizi, with some details changed, such as the landscape and the fluting of the columns. The picture was formerly attributed to the artist’s father, Jean Clouet, but is now confidently given to his son and his studio.

Oil painting on oak panel, King François I, King of France (1494–1547) on Horseback by François Clouet and Studio (Tours c.1516 - Paris 1572). A full-length portrait of the king, bareheaded, head turned towards the spectator, rides to the left, mounted on a white horse with black fetlocks, mane and tail; he wears a suit of black armour damascened with silver and carries a gilt mace in his right hand; the saddle and harness of the horse are crimson and gold, and yellow, pink and black ostrich feathers are carried at its poll; to the right is a gateway or triumphal arch with fluted columns, partly visible. The horizon, low in the picture, is bounded by bare hills. Companion picture to Upton House no.181. François I (1495-1547) succeeded his cousin, Louis XII, whose daughter he had married, in 1515. He appointed François Clouet court painter in 1541, on the death of the artist's father Jean, whose name had appeared in the royal acccounts from 1515 onwards.

Hollingworth Magniac (by 1862) the taipan and great collector (advised by J. C. Robinson), who recolonised Colworth House, Sharnbrook, Beds. (where he is buried), and at one time owned Chesterfield House, London; his son, Charles Hollingworth Magniac, known as the Colworth collection; his posthumous sale, Christie’s, 2-15 July 1892, lot 86, as attributed to Jean Clouet (Brussels c.1486-Paris 1540): bt. by Durlacher; E. Steinkopf sale, Christie's, 24 May 1935, lot 71, as by Jean Clouet: bt. by Martin for Lord Bearsted, for £546.

Robinson 1862 Sir Charles Robinson, Notice of the Principal Works of Art in the Collection of Hollingworth Magniac, Esq., 1862, no.221