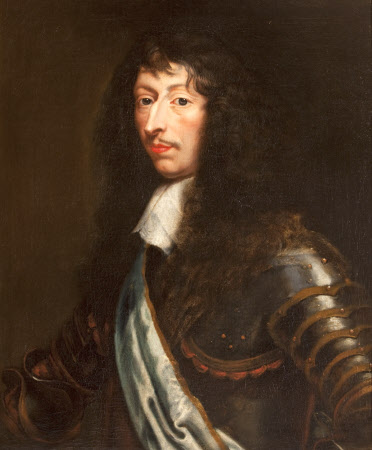 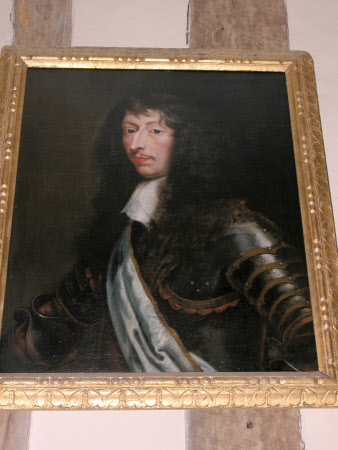 Oil painting on canvas, Prince Louis II de Bourbon, Prince de Condé, 'Le Grand Condé' (1621-1686), miscalled the 2nd Earl Rivers, studio of, or after Justus van Egmont (1601-1674), circa 1658/60. A half-length portrait of the son of Henri de Bourbon, Prince de Condé and Charlotte Marguerite de Montmorency, turned towards the left and looking out at the spectator. He wears a long, brown curled wig and a thin moustache. His right arm is half extended in front of him. He wears armour and a white linen collar at his throat. A blue silk sash with a gold edge hangs across his body from his right shoulder. The ribbon of an Order over his left shoulder has been painted out. He stands against a plain brown background. His father was a first cousin-once-removed of Henry IV, the King of France, and his mother was an heiress of one of France's leading ducal families. He married Claire-Clémence de Maillé-Brézé, niece of Cardinal Richelieu at the Palais Royal in Paris February 1641 in the presence of Louis XIII, Anne of Austria and Gaston d'Orléans.