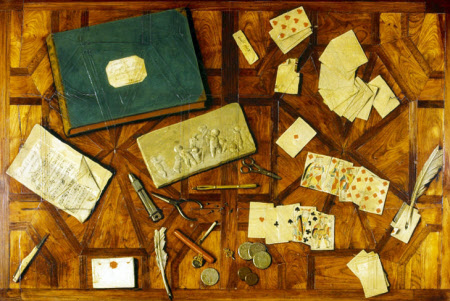 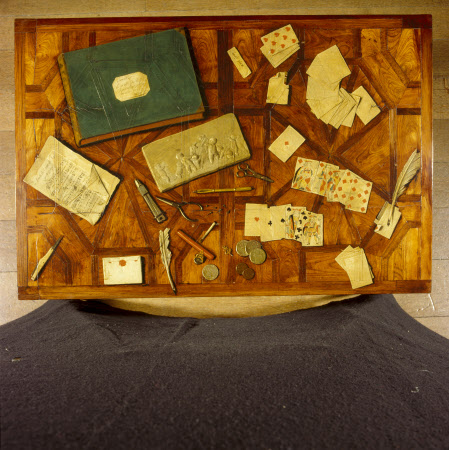 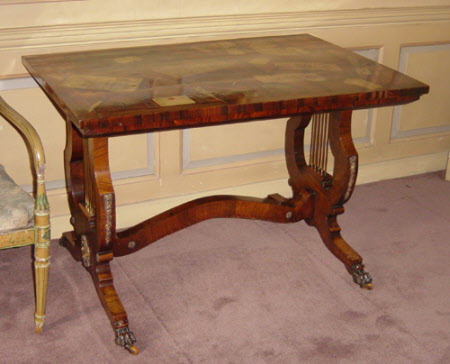 Many useful objects have been discarded on the surface of this unusual side table, including playing cards, coins, a quill pen, a penknife, a pencil, a letter with a red seal, a pair of slender scissors and some pliers, carpet tacks, a folded sheet of music (with an aria from a Belgian opera), a music book and various scraps of paper. However, any guests tempted to tidy the surface or pick up a playing card would soon be surprised, as this unusual table is designed to trick the eye. The table top is simply a very cleverly painted design. There was a long tradition of this type of representation (known in French as trompe l’oeil), and examples can be found dating from classical times onwards. The table was made in France in the late 1700s and painted by Louis-Léopold Boilly (1761–1845), whose father was a furniture- maker. The inclusion of very ordinary objects alongside decorative features, such as a plaster relief depicting children playing with a goat, appears both naturalistic and playful.

A trompe l'oeil table top, signed by Louis-Léopold Boilly (1761 - 1845), before 1793 (one element dated 1773), raised on NT 206627.2 an associated rosewood table base, English, circa 1820. A slip of paper signed 'boilly pinx'. The table-top of rosewood and kingwood veneers arranged in a parquetry pattern, and painted with various items including: - a volume of music bound in green and labelled 'Sonnates/et arietta de Mr/Charpentier pour le/clavecin 1774/valseur [?]'- some sheet music entitled 'Ariette de Zemir d’Azor/par Mr Gretry'- a terracotta plaque of putti playing with a goat, after or in the manner of Duquesnoy- some silver and copper coins of Louis XV (?) and Louis XVI, one of the former dated 1770 (?)- implements for writing, drawing, and sealing- a sealed letter (face-down, so no name or address visible)- a quantity of playing-cards, two of which have had their sides cut into (for use as tallies of the score?) - two clock-maker’s tools – a pair of ‘dog-nose’ pliers and a pair of ‘pendulum’ pliers, a clock-key and six carpet-tacks.